A Kingdom of Flesh and Fire
by Jennifer L. Armentrout
Blood and Ash #2 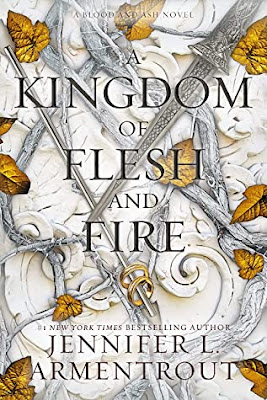 A Betrayal…
Everything Poppy has ever believed in is a lie, including the man she was falling in love with. Thrust among those who see her as a symbol of a monstrous kingdom, she barely knows who she is without the veil of the Maiden. But what she does know is that nothing is as dangerous to her as him. The Dark One. The Prince of Atlantia. He wants her to fight him, and that’s one order she’s more than happy to obey. He may have taken her, but he will never have her.
A Choice...
Casteel Da’Neer is known by many names and many faces. His lies are as seductive as his touch. His truths as sensual as his bite. Poppy knows better than to trust him. He needs her alive, healthy, and whole to achieve his goals. But he’s the only way for her to get what she wants—to find her brother Ian and see for herself if he has become a soulless Ascended. Working with Casteel instead of against him presents its own risks. He still tempts her with every breath, offering up all she’s ever wanted. Casteel has plans for her. Ones that could expose her to unimaginable pleasure and unfathomable pain. Plans that will force her to look beyond everything she thought she knew about herself—about him. Plans that could bind their lives together in unexpected ways that neither kingdom is prepared for. And she’s far too reckless, too hungry, to resist the temptation.
A Secret…
But unrest has grown in Atlantia as they await the return of their Prince. Whispers of war have become stronger, and Poppy is at the very heart of it all. The King wants to use her to send a message. The Descenters want her dead. The wolven are growing more unpredictable. And as her abilities to feel pain and emotion begin to grow and strengthen, the Atlantians start to fear her. Dark secrets are at play, ones steeped in the blood-drenched sins of two kingdoms that would do anything to keep the truth hidden. But when the earth begins to shake, and the skies start to bleed, it may already be too late.

As soon as I finished the first book, I had to open book two.
Poppy is taken against her will by Castiel. She has been deceived and now she’s in the arms of the Dark One. The one she was never to meet.
Poppy wants her freedom, she wants to find her brother and find out what happened to him. Has he ascended? Will he still care for Poppy? Or instead, a cold and flat stare is all that awaits her? Nonetheless, she is forced to go with Castiel away from the only family she has left.
Traveling to Atlantia is not easy. Many things happened on the way. Many are not happy to see the Maiden in their territory and trying to dispose of her and what she represents is always lurking in the shadows.
Castiel has promised to protect her from everyone but can he go against his family and subjects?
The second installment was a little more predictable. I still love Poppy and Castiel together. I also love Kurien so much. I do worry about the joining and I hope it’s a tasteful one.
As much as I liked it, I didn't enjoy how repetitive it becomes in certain aspects. Example: Poppy trying to stab Castiel all the time. It got quite old. Her behavior was immature and she was acting without thinking first.
I didn’t care when they made fun of Poppy for asking questions. She was entitled to knowledge. Otherwise, there were none better than the Duke and Duchess.
Lastly, some parts were not exactly boring but less exciting. It made me feel like nothing was happening.
The ending is another cliffhanger but It’s an amazing one.
I want the third book in my hands now. I’m desperate to read it and see where it leads.
I’m going to predict that Allistar is evil. Who’s with me ??
Cliffhanger: No
4/5 Fangs
Posted by MrsLeif at 11:59 AM