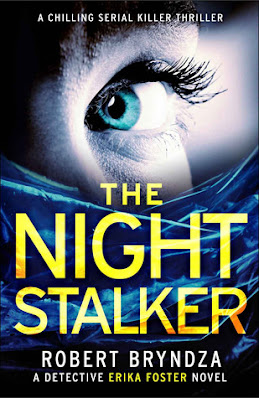 If the Night Stalker is watching, you’re already dead…
In the dead of a swelteringly hot summer’s night, Detective Erika Foster is called to a murder scene. The victim, a doctor, is found suffocated in bed. His wrists are bound and his eyes bulging through a clear plastic bag tied tight over his head.
A few days later, another victim is found dead, in exactly the same circumstances. As Erika and her team start digging deeper, they discover a calculated serial killer – stalking their victims before choosing the right moment to strike.
The victims are all single men, with very private lives. Why are their pasts shrouded in secrecy? And what links them to the killer?
As a heat wave descends upon London, Erika will do everything to stop the Night Stalker before the body count rises, even if it means risking her job. But the victims might not be the only ones being watched… Erika’s own life could be on the line.

"I’d rather get a call from a serial killer than my own sister."
DCI Erika Foster and her team have a new case.
While spending an uncomfortable dinner invitation at her friend's house, forensic pathologist Isaac Strong and his boyfriend, Steven, Erika is called into the scene of a new crime. A man has been murdered. He was found by his mother naked and asphyxiated with a bag around his head. The deceased was a well-known doctor.
At first, it looks like it could be a hate crime when pornographic male magazines are found by his bedside table but a closer look give chills to Erika who begins to think there is something evil surrounding the death.
When a second body is found murdered in the same way, Erika and her team start to believe that it could be the work of a serial killer. Furthermore, Erika believes it could be a woman serial killer. Without fighting (too much) with her superiors while avoiding endangering another investigation, Erika will have to walk a fine line to try to get to the bottom of the mystery of the Night Stalker.
I liked this one quite a bit. I love that we are getting to know the other members of the team. We get more details about Isaac (maybe a little too much), Peterson, and Moss, too.
Erika is a great character to follow. She is dealing better with her unresolved grief. The death of her husband and team still affects her dearly despite almost two years have gone by. She is broken but starting to repair.
Erika has gained the respect of her team. They support her and want to help her. I'm still not sure about Marsh. I didn't particularly like his wife in this one. We shall see what happens.
I'm excited to continue with this series. So far, I have 4 more to read.
Cliffhanger: No
4/5 Fangs
Posted by MrsLeif at 5:48 PM