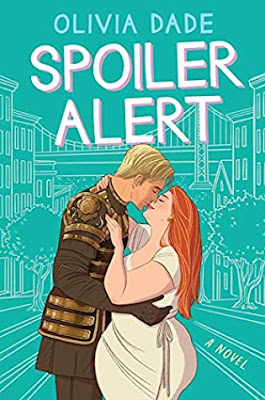 Olivia Dade bursts onto the scene in this delightfully fun romantic comedy set in the world of fanfiction, in which a devoted fan goes on an unexpected date with her celebrity crush, who’s secretly posting fanfiction of his own.
Marcus Caster-Rupp has a secret. While the world knows him as Aeneas, the star of the biggest show on TV, Gods of the Gates, he's known to fanfiction readers as Book!AeneasWouldNever, an anonymous and popular poster. Marcus can get out his own frustrations with his character through his stories, especially the ones that feature the internet’s favorite couple to ship, Aeneas and Lavinia. But if anyone ever found out about his online persona, he’d be fired. Immediately.
April Whittier has secrets of her own. A hardcore Lavinia fan, she’s hidden her fanfiction and cosplay hobby from her “real life” for years—but not anymore. When she decides to post her latest Lavinia creation on Twitter, her photo goes viral. Trolls and supporters alike are commenting on her plus-size take, but when Marcus, one half of her OTP, sees her pic and asks her out on a date to spite her critics, she realizes life is really stranger than fanfiction.
Even though their first date is a disaster, Marcus quickly realizes that he wants much more from April than a one-time publicity stunt. And when he discovers she’s actually Unapologetic Lavinia Stan, his closest fandom friend, he has one more huge secret to hide from her.
With love and Marcus’s career on the line, can the two of them stop hiding once and for all, or will a match made in fandom end up prematurely canceled?

Super cute! That's all Folks.
I read Spoiler Alert in one sitting. Marcus and April were awesome together.
Marcus Caster-Rupp is an actor who has been playing the famous Aeneas in the Gods of Gates series. Over the last few years, Marcus has become increasingly disappointed with the current writers of the show. He writes fanfic under the name Book!AeneasWouldNever as an outlet for his frustration with the scripts. No one can know he is doing this or he can lose it all. He keeps this a secret from everyone including from her beta reader, Unapologetic Lavinia Stan, someone he has come to believe as a friend. The other secret Marcus is keeping is that he is not just a pretty face and body. Beyond his toned muscles and exercise routine, he is a smart man. In addition. even though his acting career has had it's up and downs, he loves his craft and he takes pride in immersing in any character he is filming.
April Whittier is a plus-sized woman who has accepted her body the way it is. Also, she has come to the decision of stopping any fat-shaming thrown her way. April, who works as a geologist, is also a huge Lavinia/Gods of Gates fan. She enjoys cosplay and she's popular as a fanfic writer using her pen name Unapologetic Lavinia Stan for all things Aeneas and Lavinia's OTP.
One night on Twitter, she decides to post a picture of herself wearing her latest Lavinia's costume. Immediately responses are coming in. Some are nice and some are nasty. She was sort of expecting those. What she was definitely not expecting was for Marcus to defend her from the Troll and invite her out. Accepting the invitation is almost a no-brainer.
But what is going to happen when she realizes Marcus and Book!AeneasWouldNever is the same person? And, can she handle the paparazzi?
__
Truly enjoyable! I like how the author developed their romance. I was happy with both characters. Love their interaction as their fanfic handles. I also like the short notes before each chapter. I wish Lavinia and Aeneas were part of a real book. No doubt I would have read it if it was.
Spoiler Alert deals with a lot of different topics including fat-shaming, learning disability, books vs TV, fanfic fandom, and more.
One more thing before I finish my review. Does anyone want more Alex and Lauren?
I know I do.  Say there is a book 2 on the horizon, please!
Cliffhanger: No
4/5 Fangs
A complimentary copy was provided by Avon via Netgalley in exchange for an honest review.
Posted by MrsLeif at 9:26 AM