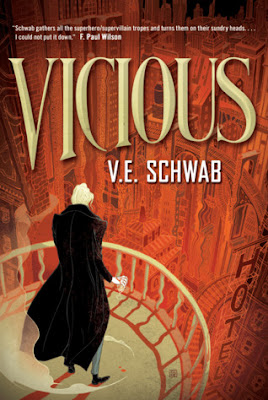 A masterful tale of ambition, jealousy, desire, and superpowers.
Victor and Eli started out as college roommates—brilliant, arrogant, lonely boys who recognized the same sharpness and ambition in each other. In their senior year, a shared research interest in adrenaline, near-death experiences, and seemingly supernatural events reveals an intriguing possibility: that under the right conditions, someone could develop extraordinary abilities. But when their thesis moves from the academic to the experimental, things go horribly wrong.
Ten years later, Victor breaks out of prison, determined to catch up to his old friend (now foe), aided by a young girl whose reserved nature obscures a stunning ability. Meanwhile, Eli is on a mission to eradicate every other super-powered person that he can find—aside from his sidekick, an enigmatic woman with an unbreakable will. Armed with terrible power on both sides, driven by the memory of betrayal and loss, the archnemeses have set a course for revenge—but who will be left alive at the end?
In Vicious, V. E. Schwab brings to life a gritty comic-book-style world in vivid prose: a world where gaining superpowers doesn't automatically lead to heroism and a time when allegiances are called into question.

The question is: In a world of EO's (Extra Ordinaries), Is the person trying to eradicate them the HERO and the person seeking revenge the EVIL one?
Who's right?
I’m inclined to believe that the one collecting strays is the least wicked one.
So how are EO's made?
This is what Eli and Victor are trying to find out.
Eliot Cardale (later on Eli Ever) and Victor Vale are college roommates and although they look like friends, jealousy, selfishness, and ambition separates them. This only gets worse once becoming an EO is on the plate. A race to be one and to outsmart the other one commences. Then a death and a betrayal will lead to ten years in prison with revenge as the only fuel through time.
Well, I like Victor Hale. There I said it. Does he make terrible mistakes? Yes. Yet, he has Mitch, Sydney and Dol on his side. That has to count for something.
Eli was never the one I was rooting for. His self-righteousness and arrogance was a turn-off.
Serena was scary. Her power was a dangerous one. So was Sidney's for that matter.
Mitch was great. He cared for Victor and Sidney. A good guy with very bad luck.
Onto the next one soon.
Cliffhanger: No
4/5 Fangs
Posted by MrsLeif at 7:04 PM