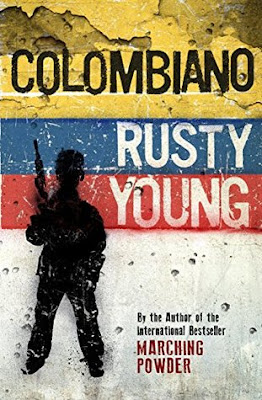 In Colombia you have to pick a side. Or one will be picked for you . . .
All Pedro Gutiérrez cares about is fishing, playing pool and his girlfriend Camila’s promise to sleep with him on his sixteenth birthday. But his life is ripped apart when Guerrilla soldiers callously execute his father in front of him, and he and his mother are banished from their farm.
Swearing vengeance against the five men responsible, Pedro, with his best friend Palillo, joins an illegal Paramilitary group, where he is trained to fight, kill and crush any sign of weakness.
But as he descends into a world of unspeakable violence, Pedro must decide how far he is willing to go. Can he stop himself before he becomes just as ruthless as those he is hunting? Or will his dark obsession cost him all he loves?
Colombiano is an epic tale of rural villages held to ransom, of jungle drug labs, cocaine supermarkets, witch doctors and buried millions, of innocent teenage love, barbaric torture and meticulously planned revenge.
Superbly told and by turns gripping, poignant and darkly comic, Colombiano is the remarkable story of a boy whose moral descent becomes a metaphor for the corruption of an entire nation. Both blockbuster thriller and electrifying coming-of-age story, Rusty Young’s powerful novel is also a meditation on the redeeming power of love.

This was a sad book. A sad book because it is based on truth.
Colombia as a country has suffered so much between the Guerrilla, the illegal paramilitary Autodefensa, the cocaine lords, and the dirty politicians.
All these groups the only thing they did was kidnap, extort, blackmail, and kill innocent people while they were gaining power and money. So many lost everything to their violence and inhuman behavior.
In Colombiano, we follow fifteen-year-old, Pedro Gutierrez. Pedro was a happy teenager who's life was normal, or as normal as it could be when the guerrilla was everywhere until his father is murdered in front of his eyes.
Pedro swears to avenge his death and to find the men responsible for his loss. He and his best friend Palillo, decide to join the Autodefensa. The Autodefensa is the main enemy of the Guerrilla. At the Finca, they will undergo military training, learn how to cut a body into pieces and dispose of it, learn how to shoot and kill the "enemy" on command and stay loyal to the group or lose their lives in the process.
With gruesome and disturbing scenes, Colombiano shows the truth about what Colombia and its people endured for so long.
Cliffhanger: No
3.5/5 Fangs
A complimentary copy was provided by Havelock & Baker Publishing via Netgalley in exchange for an honest review.
Posted by MrsLeif at 5:31 PM