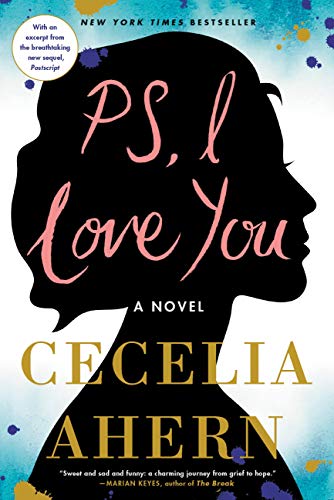 A novel about holding on, letting go, and learning to love again.
Now in paperback, the endearing novel that captured readers' hearts and introduced a fresh new voice in women's fiction Cecelia Ahern.
Holly couldn't live without her husband Gerry, until the day she had to. They were the kind of young couple who could finish each other's sentences. When Gerry succumbs to a terminal illness and dies, 30-year-old Holly is set adrift, unable to pick up the pieces. But with the help of a series of letters her husband left her before he died and a little nudging from an eccentric assortment of family and friends, she learns to laugh, overcome her fears, and discover a world she never knew existed.
The kind of enchanting novel with cross-generational appeal that comes along once in a great while, PS, I Love You is a captivating love letter to the world!

What a terrible thing to lose your soulmate!
Holly has found love with her best friend. A person she can share everything with. A person she can laugh with. A person that understands her and makes her happy. Gerry was this for Holly.
A decade after their marriage, Gerry develops a headache. He goes to the doctor and the news is devastating. He has brain cancer and his prognostic is terminal.
At the beginning of P.S. I Love You, Gerry is already dead. It has been two months since he passed away. Holly is immersed in a grief so profound that nothing can make her leave her house. Her family tries, her friends Sharon and Denise try. All is in vain.
Then her mother tells her she has found a letter addressed to Holly with the name List on it. Holly can't believe it. During her marriage and before they knew Gerry was sick, they had a running joke about a list. The list entails things Holly should abstain from doing, like wearing a white dress to a gala or things she should do in case Gerry dies and he is not around to help her.
Now, months after his death, the List has become real. He has left a letter for Holly and a note for each month left of the year. Every time, Holly opens a note, she can feel Gerry around her which brings her some happiness.
Holly will embark on a ride of self-discovery and much-needed healing. Simple and some difficult things are all part of Gerry's big plan to make Holly live again.
Losing a loved one is NEVER easy. Grief manifests in different ways. It can eat us alive. It can improve over time or become unresolved. It can destroy us. Destroy our happiness. Destroy the will to continue living. Thankfully, Holly had Gerry (from the grave) to help her out. She also had great friends and family who had her back.
I enjoyed P. S. I Love You but I'm going to say something that I never say. I like the movie more. I liked the movie so much that when I went to Ireland, I went to all the special places Holly went with Gerry.
One guess as to what I did after finishing the book?
Yep, watch the movie (again) with hubby this time.
Cliffhanger: No
3.5/5 Fangs
Posted by MrsLeif at 10:07 AM