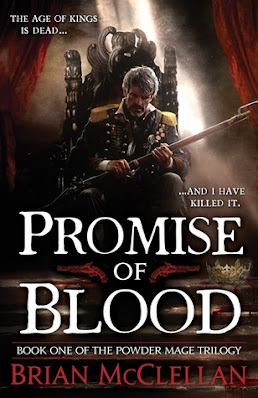 The Age of Kings is dead . . . and I have killed it.
It's a bloody business overthrowing a king...
Field Marshal Tamas' coup against his king sent corrupt aristocrats to the guillotine and brought bread to the starving. But it also provoked war with the Nine Nations, internal attacks by royalist fanatics, and the greedy to scramble for money and power by Tamas's supposed allies: the Church, workers unions, and mercenary forces.
Stretched to his limit, Tamas is relying heavily on his few remaining powder mages, including the embittered Taniel, a brilliant marksman who also happens to be his estranged son, and Adamat, a retired police inspector whose loyalty is being tested by blackmail.
But when gods are involved...
Now, as attacks batter them from within and without, the credulous are whispering about omens of death and destruction. Just old peasant legends about the gods waking to walk the earth. No modern educated man believes that sort of thing. But they should...
In a rich, distinctive world that mixes magic with technology, who could stand against mages that control gunpowder and bullets?

My husband recommended the Powder Mage trilogy. He said it was fun and interesting. He wasn't wrong. I ended up turning the pages with a speed comparable to Chef's cooking (you have to read it to get the joke).
Main characters:
*Field Marshal Tamas. Tamas has recently ended the monarchy. He has started a coup that ended with the monarchy under the guillotine. Why? because the aristocracy has taken everything from the commoners and Tamas was done with the King running the city dry.
*Taniel, a powder mage who is also Tamas's estranged son.  He has the power to hit with a bullet anyone from a long distance.
*Adamat, a cop who is now an investigator. His Knack is a perfect memory. He is told by Tamas to dig into the curse the Kabal mentioned before dying.
*Nila, A woman who has protected the last monarch alive. A five-year-old child.
*Ka-poel, a savage woman who despite being mute can make Taniel understand what she is saying and who seem to have quite interesting powers.
*Laura,  Taniel's ex-girlfriend, who cheated just before he was going to give her a ring.
*Chef: hmm. I'll keep quiet on him.
The Magic:
Privileged: Sorcerers with huge amounts of power who wear special gloves and each finger can use a different element.
A powder mage: When a powder mage snort powder they developed abilities, shooting accurately is one of them. Both Taniel and Tamas are powder mages.
A person with a Knack: Someone like Adamat who's knack is as a perfect memory.
A person who negates magic: A privilege's power can be annulled by certain people.
Ka-poel: Some type of sorcery but not like a privilege. I'm still not sure about the scale of her powers.
I enjoyed this one. There is some humor in between the action. Plenty of intrigue and there are many traitors surrounded Tamas and Taniel.
I'm going to say that my favorite character so far is Ka-poel.
I will read the second book in this trilogy soon.
Cliffhanger: Kind of.
4/5 Fangs
Posted by MrsLeif at 9:16 AM