The Return by Nicholas Sparks 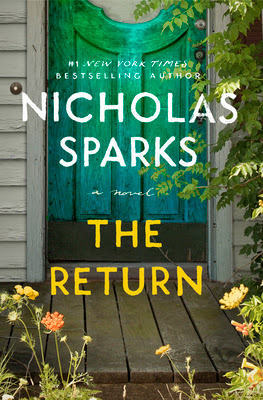 In the romantic tradition of Dear John and The Lucky One, #1 New York Times bestselling author Nicholas Sparks returns with the story of an injured Navy doctor -- and two women whose secrets will change the course of his life.
Trevor Benson never intended to move back to New Bern, NC. But when a mortar blast outside the hospital where he worked as an orthopedic surgeon sent him home from Afghanistan with devastating injuries, the dilapidated cabin he inherited from his grandfather seemed as good a place to regroup as any.
Tending to his grandfather's beloved beehives while gearing up for a second stint in medical school, Trevor isn't prepared to fall in love with a local . . . and yet, from their very first encounter, his connection with Natalie Masterson can't be ignored. But even as she seems to reciprocate his feelings, she remains frustratingly distant, making Trevor wonder what she's hiding.
Further complicating his stay in New Bern is the presence of a sullen teenage girl, Callie, who lives in the trailer park down the road from his grandfather's cabin. Claiming to be 19, she works at the local sundries store and keeps to herself. When he discovers she was once befriended by his grandfather, Trevor hopes Callie can shed light on the mysterious circumstances of his grandfather's death, but she offers few clues -- until a crisis triggers a race that will uncover the true nature of Callie's past, one more intertwined with the elderly man's passing than Trevor could ever have anticipated.
In his quest to unravel Natalie and Callie's secrets, Trevor will learn the true meaning of love and forgiveness . . . and that in life, to move forward, we must often return to the place where it all began.

The book centers around Trevor Benson, a Navy doctor.
During a tour in Afghanistan, Trevor suffered multiple injuries, including losing a few fingers terminating his career as an orthopedic surgeon. He is suffering from PTSD but he's in therapy to help him deal with it.
Trevor recently lost his grandfather whom he loved and while waiting to begin his second residency as a psychiatrist, he moves back to his grandfather's town in North Carolina. Here he meets two women.
One is a young girl by the name of Callie. No one really knows much about her except that she works at a local store and lives in a trailer park close to Trevor grandparent's property. Yet, Trevor believes she knew her grandfather and he cared for her.
The other woman is Natalie Masterson. She is a local sheriff and someone Trevor starts developing feelings for.
I wish I could say that I loved this romance but I just can't. The insta-love killed it for me. They met a couple of times and Trevor was in love with Natalie already.
Now, the mystery surrounding who Callie  is and why it was important to find out was much more interesting to me.
I loved learning about beehives. Keeping bees alive is primal to our survival. So I was very interested in them.
I also thought the PTSD angle was important since so many live with it and The Return gives you some idea on how those affected by it can be treated.
Cliffhanger: No
3/5 Fangs
A complimentary copy was provided by Grand Central Pub in exchange for an honest review.
Posted by MrsLeif at 7:09 PM