In REAL KIND OF LOVE by Sara Rider, Clem and Jake have one week to convince her quirky, overbearing family that their relationship is real during a summer vacation at a lakefront cottage. Fans of ACT LIKE IT by Lucy Parker and ACTING ON IMPULSE by Mia Sosa will love this spicy, lighthearted contemporary romance novel featuring a grumpy hero and introverted heroine. Find out what happens when a fake relationship turns into a real kind of love. 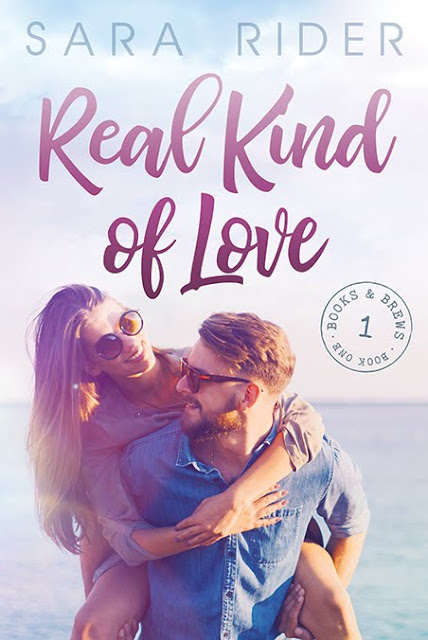 As an audiobook narrator, Clementine Cox has no trouble mastering the voices of space aliens, elven warriors, or even demon-possessed cats. But the moment she tries her hand at an erotic romance, she’s stumped. With her deadline looming, she books a week at a secluded cabin to restore her inner muse, telling her loving-but-overbearing family it’s a romantic getaway with her not-so-existent new boyfriend to keep them from worrying. She never expects them to invite themselves along to meet the new guy. Now, she has less than twenty-four hours to find a pretend boyfriend in order to save her job and, potentially, her sanity.

Workaholic Jake Donovan isn’t interested in a real relationship. After a broken engagement, all he wants to do is focus on keeping his brewpub, the Holy Grale, afloat. But when he finds out his favorite customer is in need of a fake boyfriend, and his business partners insist he take a long overdue vacation, he has no choice but to help Clem out. All he has to do is enjoy the sunshine, play nice with her family, and keep his hands to himself for the week.

But Jake’s not prepared to like waking up next to Clem every morning as much as he does. Or to feel so welcome by her quirky family. And as the line between real and fake starts to blur, he realizes one week might never be enough.

With a deep breath, she opened her eyes to see Jake standing in front of her with his arms crossed. She swallowed the bile rising in her throat, reminding herself that if mortification could actually kill, she’d have been a pile of ashes by now.
“Tomorrow?”
“Thanks for playing along. For the record, you die of Ebola tonight. Or dysentery. Whichever one works faster.”
“Clem.” He tilted his head toward her, voice deepening to a low growl. “Why do your sisters think we’re dating?”
“I kind of told them I was going on a romantic getaway this week so they wouldn’t tag along on my vacation. Except instead of giving me space, they booked the cabin right next door and now I need you to use that hammer to build me a tiny little coffin while I curl up and die.”
“Wait a second,” Julia said from the dining room doorway with Eli standing next to her, grinning. “You lied to your family about having a boyfriend and now they think Jake is coming with you on vacation tomorrow?”
“Of course you and Eli overheard,” she mumbled. “I know it was a terrible idea but—”
“It’s a great idea!”
Clem wiped her clammy palms against the ugly pair of basketball shorts she was still wearing and tried to fathom the reason for Julia’s wide grin. “Sure, if you think watching me dig myself into a deep hole with no escape is fun.”
“You don’t need an escape. You need Jake.”
“What?” Her and Jake’s gazes met like a head-on collision.
Eli rubbed his palms together. “I don’t know what devious idea is churning in your brain, Sis, but I have a feeling it’s going to be good.”
“It’s simple. I need Jake to get out of my hair for the next week before he micromanages the wedding I’ve been planning to death, and you need a fake boyfriend. It’s perfect.”
It would be perfect, the devil on Clem’s shoulder whispered. Her family was so desperate to see her in a relationship, they’d probably actually give her some space this week. Maybe even enough that she could focus on the recording she needed to turn over to the publisher two weeks from now.
But it was a ridiculous idea. There was no way Jake would go for it. He had a business. A life. A fiancée. Crap. “You can’t be serious?”
“Sorry, man,” Eli said, raising his palms. “My vote’s with Julia. We outnumber you.”
Jake’s jaw clenched so hard, Clem could see the pulse point ticking in his neck. Her heart thumped against her chest as she waited for him to laugh at her. Or shake his head in disgust. Because there was no way he would actually go through with this.
She braced herself for rejection as he turned toward her, expression grim. “I’m game if you are.”
Holy shit. 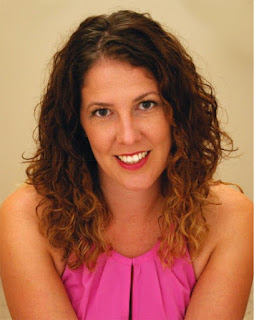 Sara Rider writes contemporary romance full of heart, heat, and happily ever after. She lives in British Columbia with her husband and daughters. She spends far too much time in public libraries and never leaves the home without her e-reader stuffed in her purse.

Posted by MissDaemon at 9:37 AM