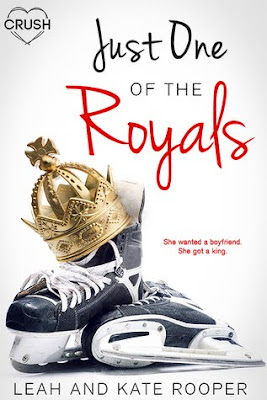 Star hockey player Daniel Sacachelli wants only two things: 1) for the Falconsto win next season, and 2) for his secret — the fact he’s actually the prince of Eldonia — to never make its way to Chicago. But if Daniel keeps avoiding his crown, their family will lose their kingdom forever.Madison Myong can’t believe that her will-they-or-won’t-they best friend Daniel isreally a prince! He’s always seemed more rebel than royal. But now, he needs to clean up his image, fast. Posing as his long-time girlfriend, Madison accompanies him back to Eldonia, intending to give Daniel a makeover fit for a king.Only, the more royal Daniel becomes, the more Madison misses her best friend. And if she does her job right, she’ll lose him forever...

Just One of the Royals was a fun and cute book to read during my royal wedding hangover! One of my favorite things about this book was the focus on friendships! All the characters had such strong dynamics with everyone around them, and it warmed my heart so much! The authors were great at creating believable and fun friendships between everyone. The romance in this book was very sweet and adorable! The romance was supposed to be the trope of a fake relationship to something more, which is one of my favorite tropes! However, the romance felt more like just friends to lovers. I didn't think the fake relationship idea was really developed all that much to make it seem realistic. The romance was still a lot of fun, but I just wish I would have seen a little more of that fake relationship trope throughout the story.Overall, this was a quick and enjoyable read! If you are craving some royal romances just like I was, then I would recommend checking out this cute book!3 / 5 Fangs*This ebook was given to me in exchange for an honest review. *

Posted by MissDaemon at 7:46 AM