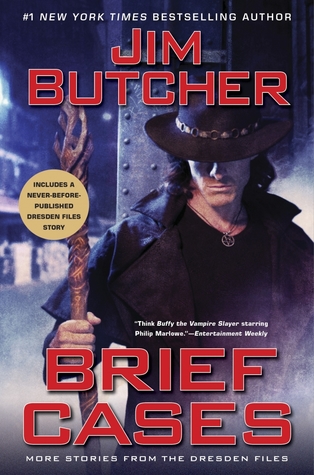 The world of Harry Dresden, Chicago's only professional wizard, is rife with intrigue--and creatures of all supernatural stripes. And you'll make their intimate acquaintance as Harry delves into the dark side of truth, justice, and the American way in this must-have short story collection.

From the Wild West to the bleachers at Wrigley Field, humans, zombies, incubi, and even fey royalty appear, ready to blur the line between friend and foe. In the never-before-published "Zoo Day," Harry treads new ground as a dad, while fan-favorite characters Molly Carpenter, his onetime apprentice, White Council Warden Anastasia Luccio, and even Bigfoot stalk through the pages of more classic tales.

With twelve stories in all, Brief Cases offers both longtime fans and first-time readers tantalizing glimpses into Harry's funny, gritty, and unforgettable realm, whetting their appetites for more to come from the wizard with a heart of gold.

Brief Cases is the sequel anthology of Side Jobs, and will be released before Peace Talks.


Set to include the following stories:


“Zoo Day”An exclusive novellette from the perspective of Maggie and Mouse.


“Curses” — from The Naked City, edited by Ellen Datlow


Harry teaches a group of young Wardens his procedure for dealing with supernatural nasties.

“Even Hand” — originally from Dark and Stormy Knights, edited by Pat Elrod. Reprinted in Beyond the Pale, edited by Henry Herz.
Gentleman Johnnie Marcone clashes with a rival supernatural power. Told from Marcone’s point of view.
Takes place between Turn Coat and Changes.

“B is for Bigfoot” — from Under My Hat: Tales From the Cauldron, edited by Jonathan Strahan. Republished in Working for Bigfoot.
Takes place between Fool Moon and Grave Peril.

“I Was A Teenage Bigfoot” — from Blood Lite 3: Aftertaste, edited by Kevin J. Anderson. Republished in Working for Bigfoot.
Takes place circa Dead Beat.

“Bigfoot on Campus” — from Hex Appeal, edited by P.N. Elrod. Republished in Working for Bigfoot.
Takes place between Turn Coat and Changes.

“Cold Case” — short story from Shadowed Souls, edited by Jim Butcher and Kerrie Hughes.
In Molly’s first job in her new role, she teams up with Ramirez to take on a Lovecraft-esque cult.
Takes place shortly after Cold Days.

“A Fistful of Warlocks” — short story for Straight Outta Tombstone, edited by David Boop.
Luccio takes on necromancers in the Wild West.

Praise for The Dresden Files:

I'm a HUGE Jim Butcher's fan. Both series I have read by him are in the top10 favorites of all times.
I'm (and the majority of his fans) desperately waiting for Peace Talks but while we are waiting, Brief Cases is here!

Brief Cases, just like Side Jobs, is a compilation of short stories in the Harry Dresden World.

Most of the short stories have Harry as the protagonist but we also get some of the other very well known players having their own.  Molly has two, one before and one after becoming the Winter Lady.  Waldo Butters facing his first quest as a knight, Gentleman Johnnie Marcone handling a sticky situation, and even Anastasia Luccio battling evil in the company of Wyatt Earp.

Of course, my favorite was the last one. It involves Harry, Maggie and Mouse spending a day at the zoo.  Why was it my favorite? Because we get the same tale told by each of them in their own perspective. Harry being a wizard and having so many enemies is never going to make his parenting easy.

Bigfoot also has 3 short stories. Bigfoot asks Harry for help with his scion. The first one, when Irwin was a kid, then as a teenager and the last one, as a young man in college. I enjoyed them all. I hope we get to see Bigfoot and Irwin showing up in any of the books to come and helping Harry when he needs it.

"Whenever you've got a choice, do good, kiddo. It isn't always fun or easy, but in the long run it makes your life better."

Don't hesitate to grab Brief Cases if you are a lover of the Harry Dresden files. It's a must!

I just have one question. When is Peace Talk coming out??? I NEED IT NOW!!!!

A complimentary copy was provided by Ace Books via Netgalley in exchange for an honest review.

Jim Butcher is the #1 New York Times bestselling author of the Dresden Files, the Codex Alera, and the Cinder Spires. He lives in the Rocky Mountains of Colorado. Find out more about Jim online at www.jim-butcher.com.