All We Ever Wanted by Emily Giffin 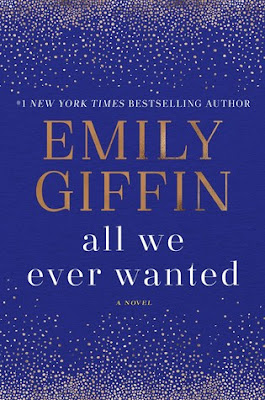 In the riveting new novel from the #1 New York Times bestselling author of First Comes Love and Something Borrowed, three very different people must choose between their family and their values.


Nina Browning is living the good life after marrying into Nashville’s elite. More recently, her husband made a fortune selling his tech business, and their adored son has been accepted to Princeton. Yet sometimes the middle-class small-town girl in Nina wonders if she’s strayed from the person she once was.


Tom Volpe is a single dad working multiple jobs while struggling to raise his headstrong daughter, Lyla. His road has been lonely, long, and hard, but he finally starts to relax after Lyla earns a scholarship to Windsor Academy, Nashville’s most prestigious private school.


Amid so much wealth and privilege, Lyla doesn’t always fit in—and her overprotective father doesn’t help—but in most ways, she’s a typical teenage girl, happy and thriving.

Then, one photograph, snapped in a drunken moment at a party, changes everything. As the image spreads like wildfire, the Windsor community is instantly polarized, buzzing with controversy and assigning blame.

At the heart of the lies and scandal, Tom, Nina, and Lyla are forced together—all questioning their closest relationships, asking themselves who they really are, and searching for the courage to live a life of true meaning.

One photo will irreversibly change the lives of two families in the latest Emily Giffin novel.

Nina Browning has it all. She's married, she's rich and her son was recently accepted into Princeton. She had everything she wanted. She gives back to her community by dedicating her free time to her philanthropy and attending event after event on the arm of her handsome husband.

Nina didn't come from money. Her life could have been very different if she had remained with her high school boyfriend. She could be living close to her parents and her best friend Julie. Instead, she lives in a mansion where money is not an object. But when her son Finch gets into trouble after taking a picture of a half-naked Lyla, she begins to wonder when things went wrong with herself and her family.

Tom Volpe is a single parent. He raised Lyla by himself and he's proud of her accomplishments including getting a scholarship into Windsor's Academy. Everything changes when he's called to pick up a drunk Lyla from a friend's house. It gets worse when he sees the damaging photo in question. Needless to say, Tom is furious and he asks the school for retribution.

Not too long after Nina, Lyla, Tom, and Finch will meet.

Kudos to Emily Giffin for weaving great topics throughout her storyline. Date rape, social media, and accountability all play a big part in it.

Social media can be used for good but more and more, I see it used to attack one another or to hurt peoples' feelings. This is exactly what happens when a picture of Lyla at her most vulnerable spreads all over Windsor Academy.

I supported Tom's decisions especially since Lyla had trouble understanding the severity of the picture. I don't think she realized a half-naked picture of her on the internet is forever. Tom was there to protect his daughter and fight for her rights. He wanted Finch to pay for what he did and I can't say that I blame him for it.

I liked Nina but I had some issues in the way she approached her family during the scandal. I'm not saying that Nina caring for Lyla's wellbeing was a bad thing, on the contrary, Lyla needed people in her corner.

Finch's character was hard to read. At times, he seemed like a good kid and at others, he seemed to be a douche who had everyone fooled.

My one complaint is about the ending. I felt the conflict was resolved all too fast and way too easy.

A complimentary copy was provided by Ballantine Books via Netgalley in exchange for an honest review.
Posted by MrsLeif at 8:00 AM