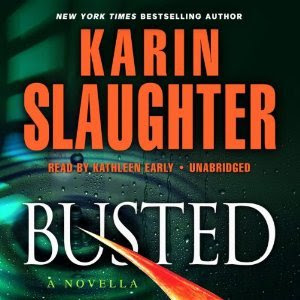 Detective Will Trent is standing in a Georgia convenience store, waiting on an obstinate ICEE frozen-drink machine. To the surveillance cameras and bored staff of the Lil' Dixie Gas-n-Go, however, Will appears to be someone very different - the menacing ex-con Bill Black. Going undercover as Bill, the Georgia Bureau of Investigation agent is about to infiltrate the most corrupt town in the most corrupt county in the new American South. But first: his ICEE.

If you're current on your Will Trent info, you know Will has a poor diet. He likes his sweets. Breakfast sometimes involves a donut and for lunch usually a hotdog.

In Busted, Will stops at a convenience store to get himself an ICEE frozen drink when bullets start flying. But Will is not dressed with his usual 3-piece-suit. Instead, he's in disguise as his undercover character, ex-con Bill Black.

Will's bad luck has him there at the wrong time and at the wrong place. Or maybe he's at the right place and he's there to prevent further damage. The aftermath leaves too many bodies for the GBI. Piecing together the reason for the crime and the culprit is up to Will, Faith, and Amanda.

As always, I love Will's character. Amanda gives him such a hard time but the truth is that Will's brain is amazing. He has a great partner in Faith, making them a great team of investigators.