Ace of Hearts (The Cursed Ravens MC #1)
by Chantal Fernando 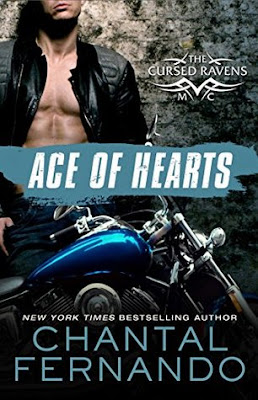 Erin Dawson had the perfect life growing up in a perfect home with a perfect family. Her parents gave her and her sister everything a child could want. But after learning that the man she’s called “dad” her whole life isn’t actually her biological father, Erin is determined to find the man who is.

Armed with her original birth certificate, she finds her father, but begins questioning if her mom had been right all along to keep this information buried. It turns out he is the president of a motorcycle club, which could not be further from the life Erin leads. But, she’s determined to get to know the man who she gets her striking blue eyes from. Despite getting what she wants and finding her biological father, it’s the slightly older, much rougher but incredibly sexy biker Ace that catches Erin’s eye.

As the new “princess” of the Cursed Ravens, Erin is learning a whole new world, but her father has made it clear she is off limits. Will Ace follow his President’s orders or will he put his heart ahead of his duty? A sizzling tale of family and passion, Ace of Hearts features Fernando’s signature “snark and sass” (Booklist) and is perfect for fans of Kristin Ashley.

Ace of Hearts was a book with lots of sexy moments, humor, and hot men...what else could you want in a book?!The main character, Erin, was a snarky queen who never backed down from a fight. She was a woman who wasn't afraid to speak her mind and stand up for what she believed in. Even though she was a tough lady, she also had vulnerabilities. The author was great at showing that even the toughest people have moments when they are scared or unsure of what to do. It made Erin feel even more relatable and human. There were times when I wanted to smack Erin's head because she was being immature or didn't think things through, but it did always make her seem more realistic.Ace was not what I was expecting from a leading man in MC book and I LOVED THAT. Ace wasn't the typical womanizer that most men are in MC books. Ace was actually very kind and thoughtful, which was showcased a lot in this book. He wasn't AS present in this book as Erin was, so there were times when I was hoping to learn a little bit more about him. I found myself really craving his perspective in some moments because there were times when I questioned his motivations and feelings. I am keeping my fingers crossed that he will be prevalent in the other books in this series so we can learn even more about him.The author is great at creating lovable characters with insane physical and emotional chemistry, which was exemplified in this book. The romance in this book was STEAMY y'all and I was so into it! There were tons of sexually charged moments that made me want to fan myself off! There were a few times when I wanted the book to focus a little more on plot development and not sexy time, but I still enjoyed all of the sexy time moments! Overall, this was a fun and light book full of romance and humor! If you are a fan of motorcycle club romances, then I recommend checking this book out!3.5 / 5 Fangs*This ebook was given to me in exchange for an honest review. *
Posted by MissDaemon at 7:33 AM