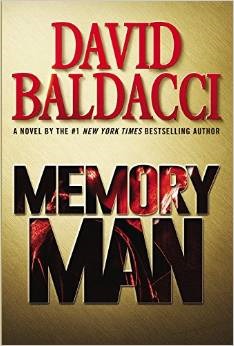 The first time was on the gridiron. A big, towering athlete, he was the only person from his hometown of Burlington ever to go pro. But his career ended before it had a chance to begin. On his very first play, a violent helmet-to-helmet collision knocked him off the field for good, and left him with an improbable side effect--he can never forget anything.

The second time was at home nearly two decades later. Now a police detective, Decker returned from a stakeout one evening and entered a nightmare--his wife, young daughter, and brother-in-law had been murdered.

His family destroyed, their killer's identity as mysterious as the motive behind the crime, and unable to forget a single detail from that horrible night, Decker finds his world collapsing around him. He leaves the police force, loses his home, and winds up on the street, taking piecemeal jobs as a private investigator when he can.

But over a year later, a man turns himself in to the police and confesses to the murders. At the same time a horrific event nearly brings Burlington to its knees, and Decker is called back in to help with this investigation. Decker also seizes his chance to learn what really happened to his family that night. To uncover the stunning truth, he must use his remarkable gifts and confront the burdens that go along with them. He must endure the memories he would much rather forget. And he may have to make the ultimate sacrifice.

Memory Man will stay with you long after the turn of the final page.

Memory Man is my first book by David Baldacci.

Memory Man had a great premise. A man who can't forget anything and now has to capture a very deadly man before he kills again.

Amos Decker's life has been changed twice. The first big change in his life happened during his first game as a pro football player. He was hit hard enough that he died and was brought back a few times. His head injury caused him to develop hyperthymesia and synesthesia. He has become an acquired savant. He can't forget anything. After recuperating in a hospital, doing rehab and attending a center with people like him, he decides to become a cop, then a detective.

The second time his life was forever changed was when he found his wife, daughter and brother in law all murdered in his home. This event, which he can't forget, messed him up so bad that he left his job. When the book begins he's living almost as a homeless and his only source of income is P.I. jobs he takes which are few and far in between. He also has let his appearance go. Long gone is the football player body. Left instead is an unkept overweight blob.

Everything changes when his ex-partner Mary Lancaster comes to tell him that a man by the name of Sebastian Leopold has confessed to killing his family. Amos knows he has to confront this man to see if he's telling the truth. At the same time, when Amos is on the way to the precinct, a massacre is occurring at the local high school in Burlington. His ex-boss asks Amos for help with the investigation. When clues start connecting the murder of his family to the massacre at the high school Amos will need all his abilities to find the murderer who seems to be one step ahead of him always.

Like I said earlier, pretty good premise. However, I did have some issues with the storyline. I couldn't believe someone who had a perfect memory couldn't figure out why the killer wanted to hurt him so bad. I also couldn't believe the killer waited so long to start his plan against Amos. It bugged me that the secondary characters were portrayed so mediocrely. Neither women were smart enough nor was the FBI. Also, when the culprit was revealed, I didn't buy his reasons.

Regardless of my issues with the story, the writing was good and I do want to continue getting to know Amos better. I already downloaded the next one.