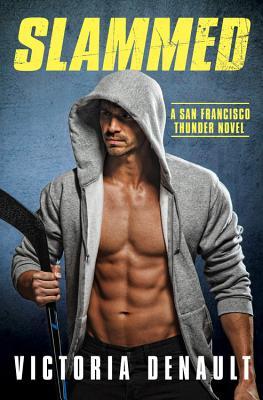 Not every goalie plays it safe...

As a publicist for the San Francisco Thunder hockey team, Dixie Braddock is too busy rescuing the players from trouble to get into any of her own. Except, of course, when it comes to the super hot new goalie. Because when a guy's kiss curls your toes and sets your heart on fire, how the hell do you just walk away? But if anyone ever catches them together, she'll lose her job faster than any slapshot.

Eli Casco is on the brink of having everything he ever wanted. He's finally been called up from the minor leagues to play on a championship team. And he just had the most mind-blowing night with the woman of his dreams. But now that he's an official Thunder player, Dixie is determined to keep her distance. None of the fame and fortune means anything to him without her to share it. If he truly wants Dixie in his life, it's time to throw down his gloves and put everything on the line.

“Do you mind if I follow you home tonight?" I ask her with a serious stare. "Because my mother always told me to follow my dreams.”

Slammed was my first book by Victoria Denault.

Slammed had all the great ingredients. It had sass, amazing banter, goofy lines and a whole lot of romance. Just perfect!

Slammed's prologue let us see the first meeting between the main characters. Dixie Braddock is running late for her first day at her new job as PR for the San Francisco Thunder when she meets Eli. They shared a passionate kiss before both learn who the other one is. Fast forward a year later, and now Dixie and Eli are about to see each other again.

Dixie Braddock is loving her job. She's a workaholic but she also spends plenty of time with her family. She's Jude Braddock's sister who plays for the Thunder. Yet, Dixie wants her relationship with Jude to be under wraps. She doesn't want people thinking she got the job because of who her sibling is. She has worked hard to be where she's at and nothing will interfere with her destiny except a certain goalie she can't seem to forget.

Elijah "Eli" Casco is currently part of the hockey minor league for the Thunder. His brother Levi is the captain of the Thunder. They have a great relationship although neither gets along very well with their parents. Eli left college to follow his dream but an injury in the rink almost took his life. He's still dealing with its repercussions when he meets Dixie. He wants to prove that he can move to the NHL as their goalie but even he has doubts about his own capacity.

It was so easy to love Slammed. Both main characters were delightful. Their banter and skype conversations were all entertaining. I laughed and grinned through the book many times.

I also need to mention how much I enjoyed Dixie's family. Her sisters are a hoot and her relationship with Jude was a strong one too. The Braddock siblings' love for their parents was perfectly clear for everyone to see.  Same with Eli and Levi. They had a great relationship too.

Even though I didn't read Score, I think you can read Slammed as a standalone. Saying that I need to go back and read it. Jude and Zoey's story has to be an interesting one.

A complimentary copy was provided by Forever in exchange for an honest review.