Daughters of the Storm by Kim Wilkins 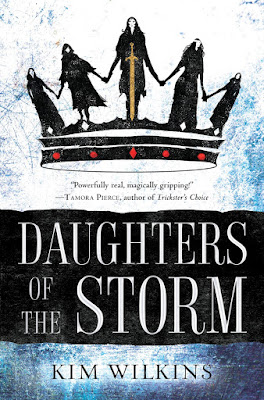 Five very different sisters team up against their stepbrother to save their kingdom in this Norse-flavored fantasy epic--the start of a new series in the tradition of Naomi Novik, Peter V. Brett, and Robin Hobb.

They are the daughters of a king. Though they share the same royal blood, they could not be more different. Bluebell is a proud warrior, stronger than any man and with an ironclad heart to match. Rose's heart is all too passionate: She is the queen of a neighboring kingdom, who is risking everything for a forbidden love. The twins: vain Ivy, who lives for admiration, and zealous Willow, who lives for the gods. And Ash, who is discovering a dangerous talent for magic that might be a gift--or a curse.

But when their father is stricken by a mysterious ailment, they must come together on a desperate journey to save him and prevent their treacherous stepbrother from seizing the throne. Their mission: find the powerful witch who can cure the king. But to succeed on their quest, they must overcome their differences, and hope that the secrets they hide from one another and the world are never brought to light. Because if this royal family breaks, it could destroy the kingdom.

This was a book that I was dying to read, so I am so disappointed that I didn't love this book as much as I was hoping I would.

None of the daughters were characters I ever wanted to root for. They were narcissistic, frustrating, dumb, and just so annoying. I get everyone has flaws, but I felt like they had no strengths that made up for their flaws. I also just couldn't understand their motivations. It was just so hard to relate to any of the daughters or even care about what they were going through.

I think this series has a lot of potential to be epic and mesmerizing, but the characters need a lot of development. I am crossing my fingers that the next book in this series will focus on that!

*This ebook was given to me in exchange for an honest review. *
Posted by MissDaemon at 10:03 AM