Not That I Could Tell by Jessica Strawser 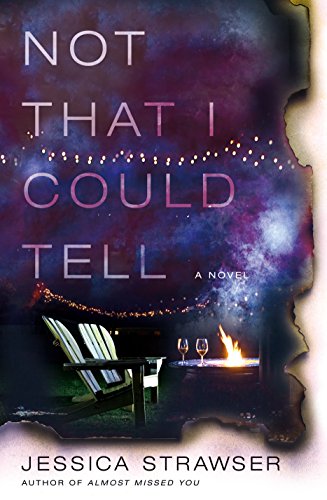 When a group of neighborhood women gather, wine in hand, around a fire pit where their backyards meet one Saturday night, most of them are just ecstatic to have discovered that their baby monitors reach that far. It’s a rare kid-free night, and they’re giddy with it. They drink too much, and the conversation turns personal.

By Monday morning, one of them is gone.

Everyone knows something about everyone else in the quirky small Ohio town of Yellow Springs, but no one can make sense of the disappearance. Kristin was a sociable twin mom, college administrator, and doctor’s wife who didn’t seem all that bothered by her impending divorce—and the investigation turns up more questions than answers, with her husband, Paul, at the center. For her closest neighbor, Clara, the incident triggers memories she thought she’d put behind her—and when she’s unable to extract herself from the widening circle of scrutiny, her own suspicions quickly grow. But the neighborhood’s newest addition, Izzy, is determined not to jump to any conclusions—especially since she’s dealing with a crisis of her own.

As the police investigation goes from a media circus to a cold case, the neighbors are forced to reexamine what’s going on behind their own closed doors—and to ask how well anyone really knows anyone else.

After reading Almost Missed You, I was excited to read another work by Jessica Strawser.

Not That I Could Tell had the perfect balance of emotion and suspense to keep me turning the pages.

This novel centers around three characters:

Kristin who's the soon-to-be ex-wife of a doctor. She has twins and she seems to be happy with her independence. She's someone who has always helped around the neighborhood but suddenly goes missing with her kids without an explanation.

Clara is Kristin's friend. She throws a gathering in her backyard for her female neighbors, not realizing that one of them will disappear soon after. Clara has her own secrets which she doesn't like revisiting but she won't be able to avoid it when the police come knocking on her door.

Izzy is the new addition to the Yellow Springs crowd. She's trying to overcome her broken heart while trying to avoid her sibling and her new husband.

I like the idea of Not That I Could Tell. Women gathering by a firepit, having fun, drinking a little too much alcohol and sharing personal secrets. Then, next thing you know, one of them is gone. The women in attendance all are trying to remember some piece of information to shed light on their friend's disappearance. Did they miss a clue? Did they really know the real Kristin? Is the husband the culprit?

I won't tell you the answers but I can honestly recommend this book. It was entertaining with well-developed characters who pulled all my strings and it was able to raise a couple of good points (don't wait too long to tell someone how you feel about them and listen to your instincts).

Best part, I thought the ending was just great!

A complimentary copy was provided by ST. Martin's Press via Netgalley in exchange for an honest review.

Email ThisBlogThis!Share to TwitterShare to FacebookShare to Pinterest
Labels: Review Jessica Strawser, Not That I Could Tell, Review, St. Martin's Press, Suspense