The Law by Jim Butcher
The Dresden Files #17.5 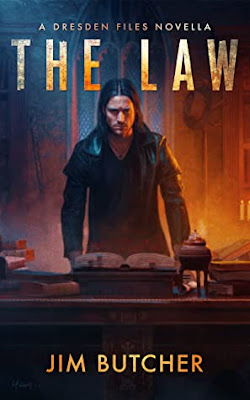 From the number one New York Times bestselling The Dresden Files series, a brand new novella set after Battle Ground, that thrusts Chicago’s only professional Wizard, Harry Dresden, back into battle–both a legal one… and the kind with explosions.
Not every danger comes in the form of a mega-threat like a Titan. Some predators are a lot cozier... more personal.
When one such creature threatens an independent tutor, Harry Dresden must shake off the blood and dirt of his most recent battles and rise to the occasion, even when it turns out that the new predator is far more dangerous and connected than first appearances would suggest.

I devoured this 99-page short story!
The Law is set a month after the events that happened on Battle Ground.
Dresden is still in mourning but when a woman comes asking for help, he can’t say no to her situation and agrees to help her.
The woman in question is a tutor who has opened 35 tutoring places in the last few years helping kids from low-income homes. In a past life, she was a hooker, and now that her pimp is out of prison he wants money from her.
Dresden starts investigating. This takes him to meet a new character named Winter Winter, and old characters including Marcone, paranoid Gary, Bob, and even MAB makes an appearance marking this short story a very fun read.
I always do the Dresden audios (except for the first book). Shocking but I didn't do the audio on this one (Jim Butcher is the narrator). I ended up liking the new characters Jim butcher added to The Law. I wonder if they will make an appearance in Twelve Months. I hope they do, to help Dresden not to hurt him.
Cliffhanger: No
4/5 Fangs
Posted by MrsLeif at 7:31 PM