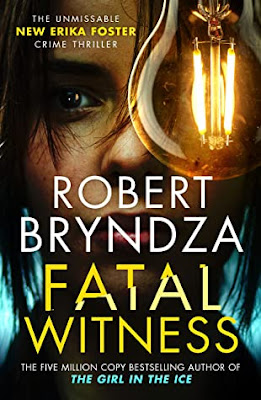 Detective Erika Foster is back in FATAL WITNESS – with a chilling new serial killer case in Robert Bryndza's multi-million bestselling crime thriller series!
How do you find a killer who has destroyed all the evidence?
Detective Erika Foster is on a late-night walk near her new house in Blackheath when she stumbles upon the brutal murder of Vicky Clarke, a true-crime podcaster.
Erika is assigned to the case and discovers that Vicky had been working on a new podcast episode about a sexual predator who preys on young female students around South London, staking out his victims in their halls of residence before breaking in at the dead of night. When Erika discovers that Vicky's notes and sound recordings were stolen from her flat at the time of her murder, it leads her to believe that Vicky was close to unmasking the attacker, and she was killed to guarantee her silence.
The case takes on a disturbing twist when the body of a young Bulgarian student doctor is discovered in the same building, and this makes Erika question everything she thought she knew about Vicky. With very little evidence, the clock is ticking to find the killer before he strikes again.

Erika Foster's new case lands on her lap by chance. Erika has moved to her new home which is in need of many repairs and furniture but at least it is hers now. She knows she needs a new bed but more importantly she needs food. She goes out walking to find food when she hears a woman's scream coming from a house just two blocks from hers. When she runs to the scene she finds a young woman's body. The person who screamed is the sister of the deceased. She discovered the body when she came looking for her when she didn’t show up for her shift at the restaurant.
Erika takes the case and starts looking for a killer. During the investigation, other issues will arise, including a case of mistaken identity, a podcast about a rapist from a decade earlier, an ex-con, and another dead body keeping the team quite busy.
I read only the first two books but I was happy to see that Erika is doing better in regards to her grief. She looks more stable in her position at work too. Sadly, Peterson is with someone else and has a kid with her but Erika is not alone, Igor is a nice addition to the mix. (Igor is her old boyfriend from back home).
In regards to the perpetrator and the hunt for him, I liked how Erika is able to follow the leads she discovers and her instincts are still quite admirable in guiding her to the right place but maybe not at the best time.
I was happy with the ending,  I’m glad that Erika is not having Christmas alone this year.
Cliffhanger: No
4/5 Fangs
A complimentary copy was provided by Raven Street Publishing via Netgalley in exchange for an honest review.
Posted by MrsLeif at 7:28 PM