First Born by Will Dean 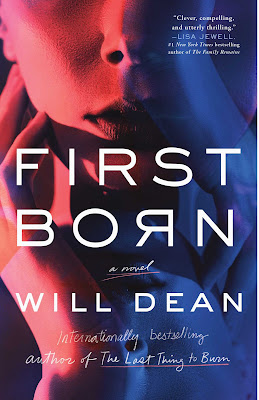 From the acclaimed author of The Last Thing to Burn, a psychological thriller about the dark secrets that emerge when a woman’s twin sister is murdered, with his signature “intense, gripping, taut, terrifying, moving, and brilliant” (Lisa Jewell, #1 New York Times bestselling author) prose.
Sisters. Soulmates. Strangers.
Molly Raven lives a quiet, structured life in London, finding comfort in security and routine. Her identical twin Katie, living in New York, is the exact opposite: outgoing, spontaneous, and adventurous.
But when Molly hears that Katie has died, possibly murdered, she is thrown into unfamiliar territory. As terrifying as it is, she knows she must travel across the ocean and find out what happened. But as she tracks her twin’s final movements, cracks begin to emerge, and she slowly realizes her sister was not who she thought she was and there’s a dangerous web of deceit surrounding the two of them.

Born a twin was very different for Molly Raven. She is the twin who worries about everything that happens around her and she is always trying to keep herself safe and avoid getting hurt. She is a little paranoid and plenty introverted.
Then there is the other twin, Katie. She is the polar opposite. She is easy-going and adventurous. Katie moved from Nottingham to NYC through a sponsorship without telling Molly about it until she had accepted the position.
Then, Molly gets a call that changes her life. Her parents called to tell her, that Katie is dead and that the police are treating her death as a homicide.
Molly needs answers. Despite being terrified of flying, she travels to NYC and tries to piece together the life her sister had in the city, the people involved in her sister’s circle, and if any of them could be the one behind her death. Nevermind, that a killer is on the loose and she might be his/her next victim.
First Born had a good mix of suspense and disbelief. I liked it but didn't love it. There were two big twists. One I guessed, the other one took me by surprise.
It was interesting to learn about Molly and her anxieties. It has to be so hard living a life in fear all the time. Exhausting really!
I can’t wait for the next story by Will Dean!
Cliffhanger: No
3.5/5 Fangs
A complimentary copy was provided by Atria/Emily Bestler Books via Netgalley in exchange for an honest review.
Posted by MrsLeif at 7:39 PM