The Guilty Husband by Stephanie DeCarolis 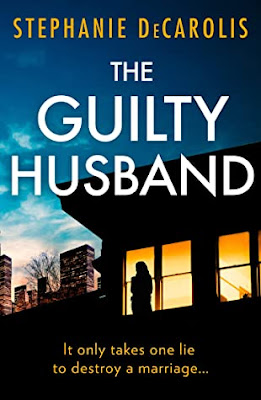 It only takes one lie to destroy a marriage.
THE PERFECT HUSBAND…
Vince Taylor has everything he could dream of. He’s the CEO of a tech firm in New York City, owns a beautiful home, and most importantly, he is married to Nicole – the woman who stole his heart the first moment he set eyes on her. Together they have built the perfect life.
ONE GUILTY SECRET
But when Layla, a stunning young intern at Vince’s company is found dead, all eyes are suddenly on him. Vince has a secret that threatens to tear their perfect world apart…
He was having an affair with Layla. And he’ll do anything to cover his tracks.
DO YOU BELIEVE HIM?
When the police discover Vince lied about their relationship, they are convinced they have found Layla’s killer.
If Vince kept quiet about the affair… what else is he guilty of?
A totally unputdownable thriller, this book will have you gripped from the very first page until the jaw-dropping final twist. Fans of The Perfect Couple, My Perfect Wife and The Undoing will love this novel!

A domestic suspense that had the right elements to attract this reviewer!
We all know the story. A man cheats. The woman he was having an affair with is found murdered. The husband becomes the main suspect.
Did he do it?
Vince Taylor had everything. He is the CEO of Kitztech, a successful tech company responsible for famous apps. He is married to his beautiful and lovely wife, Nicole. Then a new intern, Layla begins working for his company. He becomes entangled with Layla and when he decides to break things up with her, she is found dead in Central Park. Cause of death: blunt head trauma.
The cops, Detective Allison Barnes and detective Jack Lanner come knocking asking questions and all clues point to Vince as the prime suspect. They just have to prove it.
I did not feel any empathy toward Vince. After all, he had a good life and decided to throw it all away  by cheating. He made his bed and now he had to lay in it. I wanted detective Barnes to get him for his lies. His wife deserved better!
Stephanie DeCarolis's debut novel was told from multiple POVs and had different timelines. The Guilty Husband was a fast-paced, addicting suspense novel that had me listening whenever I could. I do have to admit that I knew the ending from the very beginning but despite guessing it, I enjoyed the deliverance.

Cliffhanger: No
4/5 Fangs
A complimentary copy was provided by Harper 360-HQ digital via Netgalley in exchange for an honest review.
Posted by MrsLeif at 7:33 PM