The Change by Kirsten Miller 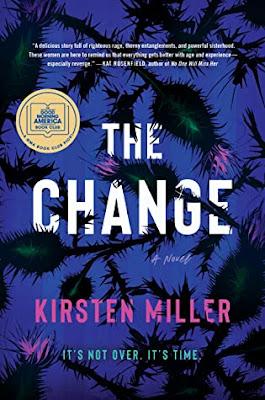 In the Long Island oceanfront community of Mattauk, three different women discover that midlife changes bring a whole new type of empowerment…
After Nessa James’s husband dies and her twin daughters leave for college, she’s left all alone in a trim white house not far from the ocean. In the quiet of her late forties, the former nurse begins to hear voices. It doesn’t take long for Nessa to realize that the voices calling out to her belong to the dead—a gift she’s inherited from her grandmother, which comes with special responsibilities.
On the cusp of 50, suave advertising director Harriett Osborne has just witnessed the implosion of her lucrative career and her marriage. She hasn’t left her house in months, and from the outside, it appears as if she and her garden have both gone to seed. But Harriett’s life is far from over—in fact, she’s undergone a stunning and very welcome metamorphosis.
Ambitious former executive Jo Levison has spent thirty long years at war with her body. The free-floating rage and hot flashes that arrive with the beginning of menopause feel like the very last straw—until she realizes she has the ability to channel them, and finally comes into her power.
Guided by voices only Nessa can hear, the trio of women discover a teenage girl whose body was abandoned beside a remote beach. The police have written the victim off as a drug-addicted sex worker, but the women refuse to buy into the official narrative. Their investigation into the girl’s murder leads to more bodies, and to the town’s most exclusive and isolated enclave, a world of stupendous wealth where the rules don’t apply. With their newfound powers, Jo, Nessa, and Harriett will take matters into their own hands…

The Charge had me completely captivated!
There are 3 women going through changes in their lives:
Nessa James is a widow who used to work as a nurse and whose twin girls have left for college. She is alone now and she has started to hear voices. The voices are getting louder. Her grandmother had a gift and it seems like Nessa shares it. She can hear the dead. Specifically, young women calling for her to find them.
Second, there is Jo Levison who was an executive and now is the owner of the local gym for women. She's miserable experiencing her menopausal symptoms including rage and hot flashes. She feels like she is burning up and she feels like she could start a fire from the heat she is experiencing.
Lastly, there is Harriett Osborne. She left her job in marketing and her husband left her and asked for a divorce. The neighborhood men and the homeowners association's president can't believe her front lawn is looking like a jungle and they want Harriett to fix it. They don't care about the rumors that say she is a witch. But Harriet is finally realizing who she is. Her power is transforming her. She knows nature can heal or kill and all the plants in her garden serve a purpose.
When Nessa discovers a female teenager's body by the beach and she can see two other dead girls close to the corpse, she understands they are all dead and with the help of Jo and Harriet hopefully, they can find the killer or killers and bring them to justice. Stopping the men who are responsible and punishing them is part of the equation.
The Change is an entertaining novel with fantastic characters and a dose of magic. These three women were a perfect team! I liked listening to their voices. Understanding where they were coming from and how their powers manifested. I was more than ready for their sweet revenge.
Cliffhanger: No
4/5 Fangs
A complimentary copy was provided by William Morrow & Company via Netgalley in exchange for an honest review.
Posted by MrsLeif at 7:26 PM