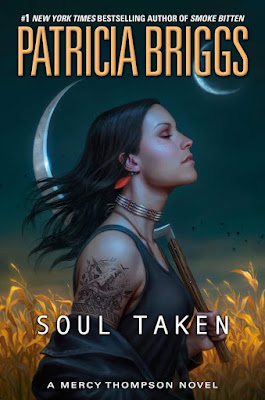 Mercy Thompson, car mechanic and shapeshifter, must face her greatest fears in this chilling entry in the #1 New York Times bestselling series.
The vampire Wulfe is missing. Since he’s deadly, possibly insane, and his current idea of “fun” is stalking me, some may see it as no great loss. But, warned that his disappearance might bring down the carefully constructed alliances that keep our pack safe, my mate and I must find Wulfe—and hope he’s still alive. As alive as a vampire can be, anyway.
But Wulfe isn’t the only one who has disappeared. And now there are bodies, too. Has the Harvester returned to the Tri-Cities, reaping souls with his cursed sickle? Or is he just a character from a B horror movie and our enemy is someone else?
The farther I follow Wulfe’s trail, the more twisted—and darker—the path becomes. I need to figure out what’s going on before the next body on the ground is mine.

I couldn’t click fast enough to start the new Mercy book.
I love the Mercyverse and being back with familiar characters and a great story had me smiling.
Did I sweat about what was happening? You better believe it.
A Soul Taker is on the loose. It’s killing people with minimal magic. Mercy has an encounter with it and she knows that the soul taker will be coming for her. Her life is in danger and she is scared but Mercy has evolved. She doesn’t fight alone. She and Adam make a great team. They support each other. Going into battle together is now the norm. So she has a better chance at surviving it, right?
So many awesome things happen in Soul Taken. We get to know more about Wulfe and Sherwood. We learn more about Zee. Tad might be dating someone. Warren is dealing with something he doesn’t want the pack to know (but in the end I thought it was cute). Samuel and Coyote both have a cameo. I felt like it was Christmas and I was getting gifts coming from everywhere. The only thing that would have made it better was a Bran appearance or maybe Anna and Charles.
This is one book that you will enjoy if you have read the series in order. Not that someone couldn’t read it and enjoy it. But I think having the background from prior books makes this book so much sweeter to the fans.
I do wonder what repercussions will come from what happened in this book.
4.5 fangs
Cliffhanger: No
A complimentary copy was provided by ACE/Penguin Publishing Group via Netgalley in exchange for an honest review.
Posted by MrsLeif at 7:20 PM