The Soulmate Equation by Christina Lauren 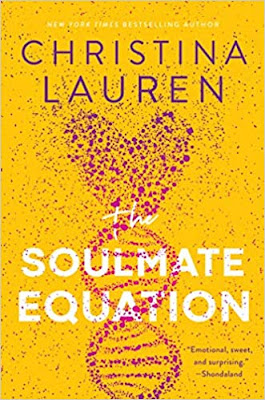 Single mom Jess Davis is a data and statistics wizard, but no amount of number crunching can convince her to step back into the dating world. Raised by her grandparents--who now help raise her seven-year-old daughter, Juno--Jess has been left behind too often to feel comfortable letting anyone in. After all, her father's never been around, her hard-partying mother disappeared when she was six, and her ex decided he wasn't "father material" before Juno was even born. Jess holds her loved ones close, but working constantly to stay afloat is hard...and lonely.
But then Jess hears about GeneticAlly, a buzzy new DNA-based matchmaking company that's predicted to change dating forever. Finding a soulmate through DNA? The reliability of numbers: This Jess understands. At least she thought she did, until her test shows an unheard-of 98% compatibility with another subject in the database: GeneticAlly's founder, Dr. River Pena. This is one number she can't wrap her head around, because she already knows Dr. Pena. The stuck-up, stubborn man is without a doubt not her soulmate. But GeneticAlly has a proposition: Get to know him and we'll pay you. Jess--who is barely making ends meet--is in no position to turn it down, despite her skepticism about the project and her dislike for River. As the pair are dragged from one event to the next as the "Diamond" pairing that could make GeneticAlly a mint in stock prices, Jess begins to realize that there might be more to the scientist--and the science behind a soulmate--than she thought.
Funny, warm, and full of heart, The Soulmate Equation proves that the delicate balance between fate and choice can never be calculated.

When I think about romance, I’m happy that Christina Lauren can write them and write them well.
This time, this pair has succeeded again in crafting interesting characters in Jess, River, Juno, and Fizzy. Furthermore, this one had a futuristic undertone by using something like GeneticAlly.
The premise: With just a small sample of saliva, you can be successfully matched with your soulmate. Forget about the dating apps when DNAduo can tell you which relationship will have a favorable outcome.
Jess is a single mother who's doing the best she can for her daughter, Juno. Her grandparents are a big part of her life since her parents are not. Her father or better said, sperm donor was never in the picture and her mother was a junkie. Juno's father is also not in the picture. He bailed when she was pregnant without a backward glance. Juno's friend, Fizzy, wants Jess to start dating again but Jess is not sure she is ready. Then on a night when she is feeling down, she decides to submit her own sample. She is shocked when she learns they have found a match for her and the identity of this so-called match is even more astonishing.
For River Pena, the scientist behind the technology, learning that he has his own diamond match (98%) astounds him. If he was not the scientist who created it, he wouldn't believe it. A diamond match is almost unheard of and this could make his company become an instant success. Learning that Jess is his match flabbergasted him until he starts spending time with her and Juno.
I know I should mention how much I enjoyed The Soulmate Equation but I think I should say instead of how much I loved Fizzy and Juno in this one. Fizzy was everything someone should want in a friend to be and Juno simply put, was adorable. They made the story more believable and complemented Jess and River's storyline perfectly.
Cliffhanger: No
4/5 Fangs
A complimentary copy was provided by Gallery Books via Netgalley in exchange for an honest review.
Posted by MrsLeif at 5:02 PM