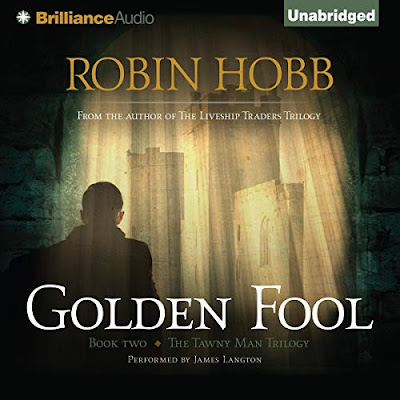 Prince Dutiful has been rescued from his Piebald kidnappers and the court has resumed its normal rhythms. But for FitzChivalry Farseer, a return to isolation is impossible. Though gutted by the loss of his wolf bondmate, Nighteyes, Fitz must take up residence at Buckkeep and resume his tasks as Chade’s apprentice assassin. Posing as Tom Badgerlock, bodyguard to Lord Golden, FitzChivalry becomes the eyes and ears behind the walls. And with his old mentor failing visibly, Fitz is forced to take on more burdens as he attempts to guide a kingdom straying closer to civil strife each day.
The problems are legion. Prince Dutiful’s betrothal to the Narcheska Elliania of the Out Islands is fraught with tension, and the Narcheska herself appears to be hiding an array of secrets. Then, amid Piebald threats and the increasing persecution of the Witted, FitzChivalry must ensure that no one betrays the Prince’s secret—a secret that could topple the Farseer throne: that he, like Fitz, possesses the dread “beast magic.”
Meanwhile, FitzChivalry must impart to the Prince his limited knowledge of the Skill: the hereditary and addictive magic of the Farseers. In the process, they discover within Buckkeep one who has a wild and powerful talent for it, and whose enmity for Fitz may have disastrous consequences for all.
Only Fitz’s enduring friendship with the Fool brings him any solace. But even that is shattered when unexpected visitors from Bingtown reveal devastating secrets from the Fool’s past. Now, bereft of support and adrift in intrigue, Fitz’s biggest challenge may be simply to survive the inescapable and violent path that fate has laid out for him.

Golden Fool is full of intrigue and secrets. Some of them revealed, some of them waiting to come out in the next book, I hope.
The Prince is now in Buckkeep and Fitz and the Fool are playing their parts. The Fool is Lord Golden and Fitz is known as Lord Golden's bodyguard, Tom Badgerlock.
Many things are happening simultaneously:
The Piebalds are still trying to hurt the Prince and unmasked him as someone who is Witted.
The betrothal ceremony of Dutiful and the Narcheska Elliania of the Out Islands is underway but Dutiful is not happy with linking his life with someone who is mostly a child. Worse, Elliana is hiding something too and she, like Dutiful, is not happy with the betrothal.
Elliana asking Dutiful to bring him the head of a dragon in order to seal their alliance and bringing an end to the war between their kingdoms.
A Bingtown delegation has arrived to talk to Kettricken, the Queen about uniting forces against a common enemy, and Selden Vestrid is there to ask for help with Tintaglia and the dragons.
Amber's friend, Jek has come with the LiveShip's delegation to meet with Lord Golden.
FitzChivalry has to teach Dutiful about the Skill and they find out that others might have it too. After all, Dutiful must have a coterie.
The Queen wants to meet with Old Blood representatives to discuss a way to move forward. This is where Web's character is introduced to us.
Burrick's son, Swift has arrived in court.
Fitz meeting Thick, a simpleton who is a powerful Skill-User.
Fitz dealing with his adopted son, Hap living in Buckkeep town and the mistakes he might be making.
Fitz Skill-dreaming with Nettle.
The Fool knows that he as a White Prophet and Fitz as the catalyst, will have to fight against the Pale Woman's plans.
Golden Fool was another wonderful addition to this world. Characters are fully developed. The lore of the Witt and the Skill continues. We learn more facets of each magic and once again Fitz is the Changer of many things to come.
The strings are all set for a wonderful conclusion of this trilogy. Hobb has every piece in motion to converge masterfully in The Fools' Fate.
Cliffhanger: No
4.5/5 Fangs
Posted by MrsLeif at 7:40 PM