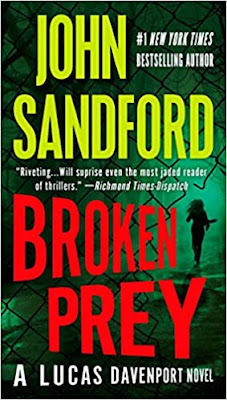 The first body is of a young woman, found on a Minneapolis riverbank, her throat cut, her body scourged and put on display. Whoever did this, Lucas Davenport knows, is pushed by brain chemistry. There is something wrong with him. This isn’t a bad love affair.
The second body is found three weeks later, in a farmhouse six miles south. Same condition, same display—except this time it is a man. Nothing to link the two victims, nothing to indicate that the killings end here.
“This guy…” Lucas said. He took a deep breath, let it out as a sigh. “This guy is going to bust our chops.”
And soon he is going to do far, far worse than that…

Lucas is back!
This time he is after a real piece of work serial killer. Someone so evil that he doesn't care if what he tortures and kills is a man or a woman.
The first body was of a woman. She was brutalized and displayed. Sloan, a homicide detective, and Lucas's friend is on the case. Unfortunately, as the days passed and no other lead becomes available, the case starts to become a cold one.
Then, three weeks later, a second killing occurs. Some DNA is found and this leads Lucas to a recently released inmate named Charlie Pope. Pope had been incarcerated in a hospital where 3 other inmates could have been advising him on how to perfect his crimes once he was free. The only problem Lucas has is that everyone who knew Pope thought of him as someone rather dumb.
Lucas begins to question if there's a second killer involved?
Broken Prey was quite different from other books in this series as we are kept in the dark about the killer's identity. Things don't go as smoothly as in others novels since Lucas can't seem to catch a break. Also, he's missing his family since Weather and the kids are away in London. Worse, his friend Sloan is thinking of retiring.
Through Broken Prey, the major point in levity comes from the list of songs Lucas is making. Lucas received a gift for iTunes and he's trying to create the best 100 rock song's playlist. The characters keep on advising Lucas on which songs to add or eliminate from his list. At the end of the book, the list is there and I can say, that I approved. Might need to add a few of the songs I don't currently have on my playlist and some Beatles too :)
Cliffhanger: No
4/5 Fangs
Posted by MrsLeif at 4:58 PM