Ship of Destiny by Robin Hobb
The Liveship Traders #3 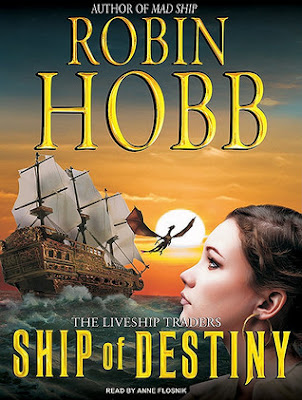 As Bingtown slides toward disaster, clan matriarch Ronica Vestrit, branded a traitor, searches for a way to bring the city's inhabitants together against a momentous threat. Meanwhile, Althea Vestrit, unaware of what has befallen Bingtown and her family, continues her perilous quest to track down and recover her liveship, the "Vivacia, "from the ruthless pirate Kennit.
Bold though it is, Althea's scheme may be in vain. For her beloved "Vivacia "will face the most terrible confrontation of all as the secret of the liveships is revealed. It is a truth so shattering, it may destroy the "Vivacia "and all who love her, including Althea's nephew, whose life already hangs in the balance.

The conclusion of this trilogy was satisfying in all the ways that it counts!
I was happy to see that all the Vestrid women were strong in character. They did what had to be done, despite all being in different situations with different dangers. The same thing goes for Wintrow who became a man despite his young age and his little brother, Selden, who stood up when it was vital.
My favorite character development hands down has to be Malta. She evolved from someone I hated to becoming my favorite character (sorry, Althea but it's true). Malta went from an annoying little brat to a resourceful and interesting young woman who has been well-matched with Reyn.
The next best character development was Paragon. Through this book, we learned what truly happened to him and by who. Thanks to Amber in Ship of Destiny, he is comfortable in his own skin. Or should I say wood?
Tintaglia was a wonderful addition to the mix. I can see how she will change the future of the realm.
If I have to say what I disliked about this book, I would have to say it had to do with where the story went with Kennit. I felt it was a wasted use of an antihero. I'm also not sure I liked the new Vivacia but I guess it had to happen.
I can't finish this review without making a stand. If you are an impatient reader (which I am) this series is not for you. The Realm of the Elderlings series is full of books that are long, detailed, and slow prosed. They are meant to be savored and unless you have been warned like I was (thank you hubby), you won't enjoy them.  You will think why are all these details important? Why does it matter? I would answer that the key is most of the time in the details.
Cliffhanger: No
4/5 Fangs
Posted by MrsLeif at 5:01 PM