The Mad Ship by Robin Hobb
The Liveship Traders #2 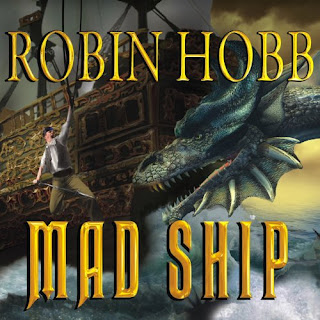 The Farseer trilogy continues the dramatic tale of piracy, serpents, love and magic. The Vestrit family's liveship, Vivacia, has been taken by the pirate king, Kennit. Held captive on board, Wintrow Vestrit finds himself competing with Kennit for Vivacia's love as the ship slowly acquires her own bloodlust. Leagues away, Althea Vestrit has found a new home aboard the liveship Ophelia, but she lives only to reclaim the Vivacia and with her friend, Brashen, she plans a dangerous rescue. Meanwhile in Bingtown, the fading fortunes of the Vestrit family lead Malta deeper into the magical secrets of the Rain Wild Traders. And just outside Bingtown, Amber dreams of relaunching Paragon, the mad liveship.
In the second breathtaking volume of Robin Hobb's Liveship Traders trilogy, a new tide of glory and terror sweeps forward the story of the Vestrit clan, their liveship Vivacia, and all who strive to possess her.
As the ancient tradition of Bingtown's Old Traders slowly erodes under the cold new order of a corrupt ruler, the Vestrits anxiously await the return of their liveship--a rare magic ship carved from sentient wizardwood, which bonds the ships mystically with those who sail them. And Althea Vestrit waits even more avidly, living only to reclaim the ship as her lost inheritance and captain her on the high seas. But the Vivacia has been seized by the ruthless pirate captain Kennit, who holds Althea's nephew and his father hostage.
Althea and her onetime sea mate Brashen resolve to liberate the liveship--but their plan may prove more dangerous than leaving the Vivacia in Kennit's ambitious grasp....

The second book in this trilogy has the Vestrit family members all over the place.
Althea is in the Ophelia and doing a good job at it but her thoughts are all about recovering her ship Vivacia. She dreams of being able to be back on her ship and sailing her.
Ronica and Kefrria are trying to deal with the loss of their family fortune and keeping their house and holdings the best way they can.
Malta is still behaving like an obnoxious and selfish kid but as the story progresses, I can see hints of a different person emerging.
Wintrow is a captive onboard the Vivacia. He's shocked when he realizes that Kennit has started charming the ship and stirring her into piracy. He also starts believing that Kennit is not all bad.
Amber wants to protect Paragon from getting destroyed. She wants to buy him to avoid the liveship from being chopped into pieces.
Brashen finds himself close to piracy too until he hears that Vivacia has been taken by Kennit. He will go back home to alert the Vestrits of her capture. They all know that they will need help getting Vivacia back and Paragon might be the answer to their prayers.
The Mad Ship sets up a good foundation for the end of the trilogy. All the Vestrits are in danger one way or the other and Hobb never makes things easy for any of them. Although, not as hard as they were for Fitz.
Great character development especially with Malta and an amazing woven and intricate world-building as always.
Cliffhanger: No
4/5 Fang