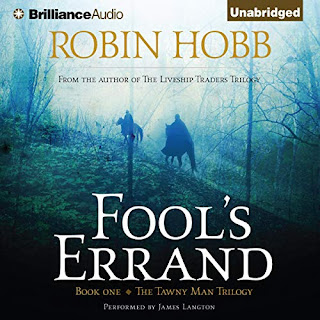 For fifteen years FitzChivalry Farseer has lived in self-imposed exile, assumed to be dead by almost all who once cared about him. But that is about to change when destiny seeks him once again. Prince Dutiful, the young heir to the Farseer throne, has vanished and FitzChivalry, possessed of magical skills both royal and profane, is the only one who can retrieve him in time for his betrothal ceremony--thus sparing the Six Duchies profound political embarrassment...or worse. But even Fitz does not suspect the web of treachery that awaits him or how his loyalties to his Queen, his partner, and those who share his magic will be tested to the breaking point.

What an amazing journey this is turning out to be!
In order to understand how happy I am after reading Fool's Errand, you have to be a fan of Fantasy. It could be Harry Potter, Lord of the Rings, Chronicles of Narnia, or insert your favorite here. Just think more books in the world you adore are available.
I’m back with FitzChivalry Farseer and the Fool. What a team!
The last time we saw FitzChivalry Farseer, he had saved the Six Duchies yet no one knows he did (well almost no one). For the last fifteen years, Fitz has been living like a hermit with Nighteyes and Hap. Hap was brought to Fitz by Staling when he was a child. Fitz has raised him as his adopted son. Fitz is hiding his identity and going by the name of Tom Badgerlock.
Now that Hap is becoming a man. He needs money to learn a trade. Fitz fears that is time for him to let him go.
Then his past comes knocking.
First, there is Chade who wants Fitz to come back to Buckkeep to teach Prince Dutiful the Skill.
Then, The Fool returns from who knows where (haha we do know) and stays for a little while.
Then a messenger from Queen Kettricken arrives asking Tom to come back to Buckkeep, his help is needed. When he arrives, he discovers that Prince Dutiful is gone. He has been taken and just before his betrothal ceremony! Fitz must find him before it's too late. Fitz, Nighteyes, the Fool, and Huntswoman Lauren will embark on this errand.
Between the Skill and the Wit, this is another magnificent piece of fantasy that Robin Hobb gives us.
Fitz is more mature and suffers less although I do feel like he has been used and coerced more times than he should.
I won’t lie, a certain part of the book made me ugly cry. #Devastated. I will say no more.
Starting the next one now.
Cliffhanger: No
4.5/5 Fangs
Posted by MrsLeif at 5:04 PM