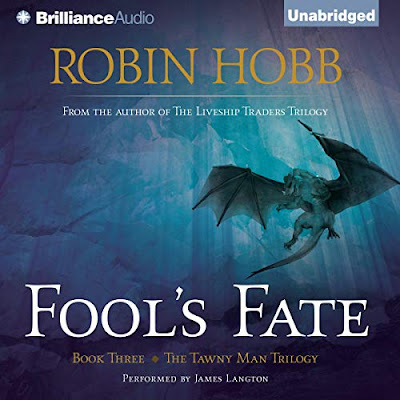 The triumphant conclusion to the Tawny Man trilogy, from the author of the bestselling Farseer and Liveship Traders trilogies. The moving end to the tale of the Farseers, in which kingdoms must stand or fall on the beat of a dragon's wings, or a Fool's heart. A small and sadly untried coterie - the old assassin Chade, the serving-boy Thick, Prince Dutiful, and his reluctant Skillmaster, Fitz - sail towards the distant island of Aslevjal. There they must fulfill the Narcheska's challenge to her betrothed: to lay the head of the dragon Icefyre, whom legends tell is buried there deep beneath the ice, upon her hearth. Only with the completion of this quest can the marriage proceed, and the resulting alliance signal an end to war between the two kingdoms. It is not a happy ship: tensions between the folk of the Six Duchies and their traditional enemies, the Outislanders, lie just beneath the surface. Thick is constantly ill, and his random but powerful Skilling has taken on a dark and menacing tone, while Chade's fascination with the Skill is growing to the point of obsession. Having ensured that his beloved friend the Fool is safely left behind in Buckkeep, Fitz is guilt-stricken; but he is determined to keep his fate at bay since prophecy foretells the Fool's death if he ever sets foot on the isle of the black dragon. But as their ship draws in towards Aslevjal a lone figure awaits them.

Satisfying ending to this trilogy!
Hobb is able to connect all the loose ends and make its conclusion a smooth one.
In the Fool's Fate, Fitz is trying to prevent the Fool from getting into the ship leaving for the island of Aslevjal. As per the last book, Elliana has asked Dutiful to bring him the head of IceFyre in order to seal their alliance. The Fool has confided in Fitz, the Fool knows he needs to save the dragon but traveling to the island means his death and Fitz will do anything to prevent his friend from dying.
During the voyage, things are not easy. Thick is seasick and with his Skill, he is making everyone feel miserable on the boat. Tempers are running high and Dutiful puts Fitz to the task of helping Thick who in turn asks Nettle for help. Yet, their dreams are invaded by Tintaglia who wants to learn more about IceFyre.
Before leaving for the frozen island where Icefyre is supposed to be, they learn of a legend involving the Black Man. Once on the island, someone is already waiting for them. Can you guess who?
The Skill and Witt coteries are in disagreement. One wants to slay the dragon, the other one wants to save it.
So many secrets are finally revealed including the Pale Woman, the Black Man, the dragons, the Skill, the Witt, Fitz, The Fool, the memory stones. I love the explanation we are given about why the Fool and the Black Man were able to change colors while the Pale woman was not.
The Fool and FitzChivalry's friendship and bond are unlike anything else. I love these characters together. I was also happy to see so many other characters reappearing and completing their circle. Yes, they were also some very sad moments that hurt me just as well.
I'm not sure knowing there are 3 more books involving the Fool and Fitz (after the Rainwild 4 books) is a good thing. I think I liked how this ended and I'm not sure I want to know what happens next. What am I saying? Of course, I need to know.
Cliffhanger: No
5/5 Fangs
Posted by MrsLeif at 8:04 PM