Thick as Thieves by Sandra Brown 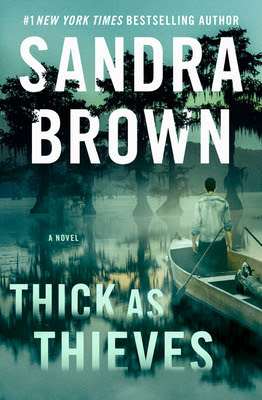 In this tantalizing thriller from a #1 New York Times bestselling author, a woman uncovers lifelong secrets as she searches for the truth behind her father's involvement in a heist gone wrong.
Twenty years ago in the dead of night, four seemingly random individuals pulled the ultimate heist and almost walked away with half a million dollars. But by daybreak, their plan had been shot to hell. One of them was in the hospital. One was in jail. One was dead. And one got away with it.

Arden Maxwell, the daughter of the man who disappeared all those years ago -- presumably with the money, after murdering his accomplice -- has never reconciled with her father's abandonment of her and her sister. After countless personal setbacks she decides to return to her family home near mysterious Caddo Lake, and finally get answers to the many questions that torment her. Little does she know, two of her father's co-conspirators -- a war hero and a corrupt district attorney -- are watching her every move.

Ledge Burnet, a rebellious teen at the time of the heist, evaded his jail sentence by enlisting in the army. Now he's back in town to care for his ailing uncle-- and to keep his eye on the county's corrupt district attorney, whom he suspects was the real murderer. Although the two are bound to silence because of the crime they committed together, each has spent years waiting and hoping that the other will make a fatal misstep. But the arrival of their elusive accomplice's daughter, Arden, who may know more about the missing money than she's telling, sets them both on red alert. She ignites Ledge's determination to expose the D.A.'s treachery . . . and sparks a desire he wishes to deny.

Sandra Brown is a must-read for me. She is one of my favorite writers. I couldn’t pass on Thick as Thieves. I'm extremely thankful to Grand Central Publishing for my early copy.

In Thick as Thieves, a heist gone wrong, a murder, and a father’s disappearance twenty years ago are at the center of the story.

Arden Maxwell decides to move back to her family home when she realizes she is pregnant. Her home has been isolated and left unkept since her father disappeared that awful night twenty years ago. Arden might not realize it at the beginning but she is looking for answers. After tragedy strikes, she is determined to find out more about her father's disappearance and it seems like Ledge Burnet might have some or all of the answers.

Life has not treated Ledge Burnet fairly. He lost his parents at an early age and his uncle and his wife took him in. Soon after, his aunt died and it just became the two of them. Ledge was placed in juvie for smoking marijuana. An error he's not going to repeat until the night Arden's father disappears and he is being taken to jail after he's stopped by cops and drugs are found in his car. Ledge is certain he was framed two decades ago and he, as much as Arden, wants to know the truth.

As with the majority of the books by Sandra Brown I've read, this one is a page-turner. The suspense was killing me. Some things I guessed, some others took me by surprise.

Mrs. Brown can write great enemies. In this case, Rusty was an evil man with too much power and a hateful soul. It was so easy to hate him.

My sole complaint would be the ending. Everything resolved too neatly for me. Anyway, the end was not enough for me not to enjoy it.

A complimentary copy was provided by Grand Central Pub in exchange for an honest review.