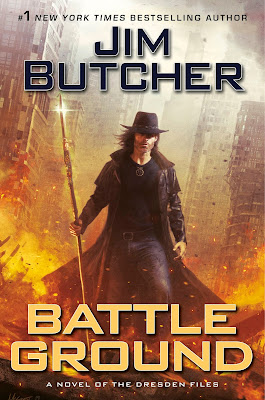 THINGS ARE ABOUT TO GET SERIOUS FOR HARRY DRESDEN, CHICAGO’S ONLY PROFESSIONAL WIZARD, in the next entry in the #1 New York Times bestselling Dresden Files.

Harry has faced terrible odds before. He has a long history of fighting enemies above his weight class. The Red Court of vampires. The fallen angels of the Order of the Blackened Denarius. The Outsiders.

But this time it’s different. A being more powerful and dangerous on an order of magnitude beyond what the world has seen in a millennium is coming. And she’s bringing an army. The Last Titan has declared war on the city of Chicago, and has come to subjugate humanity, obliterating any who stand in her way.

Harry’s mission is simple but impossible: Save the city by killing a Titan. And the attempt will change Harry’s life, Chicago, and the mortal world forever.

My heart is still pounding from all the action!!! One Huge Epic Fight!

Also, my heart is a little broken now. I was expecting what happened but not the way it happened.

Dresden, you have done it again! I can’t help but root for you. You make yourself responsible for everyone and you want to keep everyone safe.

This time Chicago and its people, human and supernatural lives are all at stake. The Fodor and Ethniu, the Titan, are coming to destroy it. The White Council, the White Court, the Summer Court, the Winter court, Marcone with his people, the Knights, the werewolves, and every other group I forget are all taking a truce and battling one enemy together. If not, there won't be a next day for many of them. Apocalypse is in the mirror.

There were so many things l liked about Battle Ground. I want to tell you but then I'm spoiling it for you. Few comments though:

I know Dresden doesn’t care for Marcone but I kinda like him. I like Mab too despite her being utterly terrifying but I can't help but think about what she went through to become what she is now.

I love Waldo and Michael. They have Harry’s back Always. Sanja made me laugh, especially at the end.

Despite Dresden loving Murphy, I still have hope for Dresden and Molly (you're my girl) although I like Lara too.

I do hope this time Jim Butcher doesn’t take six years for the next book. I’m dying to see what happens next. Jim leaves so many clues as to what is to come and it seems Dresden will need 365 days to figure it out.

The adorable Christmas story at the end of the book was perfect. Anything with Mouse, Michael, Molly, Mab, and a little Christmas spirit together, has to be good.

A complimentary copy was provided by Ace via Netgalley in exchange for an honest review.