The Things We Cannot Say by Kelly Rimmer 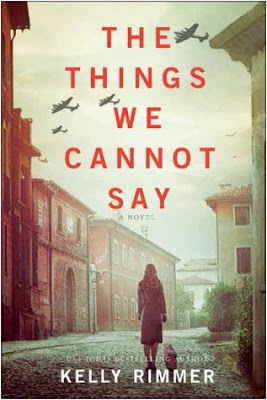 In 1942, Europe remains in the relentless grip of war. Just beyond the tents of the Russian refugee camp she calls home, a young woman speaks her wedding vows. It’s a decision that will alter her destiny…and it’s a lie that will remain buried until the next century.

Since she was nine years old, Alina Dziak knew she would marry her best friend, Tomasz. Now fifteen and engaged, Alina is unconcerned by reports of Nazi soldiers at the Polish border, believing her neighbors that they pose no real threat, and dreams instead of the day Tomasz returns from college in Warsaw so they can be married. But little by little, injustice by brutal injustice, the Nazi occupation takes hold, and Alina’s tiny rural village, its families, are divided by fear and hate. Then, as the fabric of their lives is slowly picked apart, Tomasz disappears. Where Alina used to measure time between visits from her beloved, now she measures the spaces between hope and despair, waiting for word from Tomasz and avoiding the attentions of the soldiers who patrol her parents’ farm. But for now, even deafening silence is preferable to grief.

Slipping between Nazi-occupied Poland and the frenetic pace of modern life, Kelly Rimmer creates an emotional and finely wrought narrative that weaves together two women’s stories into a tapestry of perseverance, loyalty, love and honor. The Things We Cannot Say is an unshakable reminder of the devastation when truth is silenced…and how it can take a lifetime to find our voice before we learn to trust it.

With fat tears running down my face, I'm writing this review.

It has been almost a year since The Things We Cannot Say came out yet life has made it impossible for me to read it before now. So many friends recommended it and they were not wrong. It's a beautiful devastating story. One that will be impossible to forget.

I went in blind which I'm so happy I did. Kelly Rimmer does a beautiful job at creating Tomasz, Alina, Alice, Eddie, Emilia, Saul, and all others right in front of me.

The story begins with a wedding and then we jump to the past. A past that involves 6 million lives lost to the Nazi invasion to Poland, where 18% of the population was lost and 90 percent of Polish Jews died.

Alina is the youngest daughter of the Dziak family. Truda her oldest sister is married to Mateusz. Alina's twin brothers, Filipe and Stanislaw help her father, Bartuk, and her mother, Faustina with farming. Alina, being the youngest, gets away with doing less work and uses any free time she has to spend it with Tomasz, her true love.

Alina has known she wanted to be married to Tomasz since she was nine years old and he was twelve. Now, she is fifteen and Tomasz is ready for University. Just before he leaves to start medical school in Warsaw, Tomasz and Alina get engaged. Tomasz promises to return for her. Then WWII begins.

As farmers, Alina and her family live a hard yet comfortable life until the invasion. When the Nazis invade, everything changes drastically.

In the present (2019) Alice is dealing with her own crisis. Her dear babcia (grandmother) has had a stroke. Her son, Eddie who is the autism spectrum and communicates with an AAC app, is having a meltdown in the aisle of the store due to a yogurt label changed. Her daughter is a genius who needs constant stimuli and her husband is far from helpful with her son.

Then her Babcia communicates using Eddie's app and tells Alice:


The rest is for you to read.

A masterful piece is what The Things We Cannot Say novel is. It depicts the horrors of war, the fear, the famish, and so much death but also the bravery and the courage humanity can have during the worst of times.