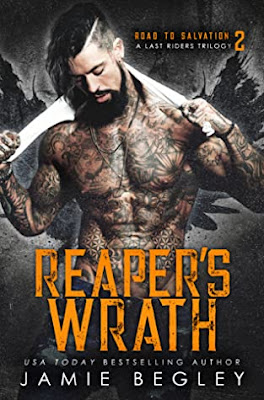 Have you ever wondered how soulmates fall in love after they meet?

One touch was all it took to pierce through the hatred, the revenge, the payback that kept Reaper’s sanity in check. Unable to bear to be touched, Ginny breezed through his safeguards, stirring the flames of desire and trying to make him believe love was possible again, while his tortured soul just wanted to find the peace he had promised himself once all his enemies were there to keep him company in hell.

One look was all it took for Ginny to recognize her soulmate. Now she was determined to show him that love, mercy, and forgiveness would bring the light back into his life. Her warrior was no longer fighting alone to battle his nightmares, and this Kentucky woman wasn’t afraid of stealing his heart and making it hers.

One love that would have to be strong enough to overcome Reaper’s biggest enemy—himself. Having lost faith in love, The Last Riders, and himself, it was only when Ginny committed a desperate selfless act of love that Reaper realized that, to save her, he was going to have to put his life on the line again. This time if he lost, not only would he lose Ginny, but the Last Riders forever.

How was he supposed to know his wrath could cost him everything?

Reaper's Wrath felt quite a bit different from any other book in this series. It had a much slower pace than the others. It certainly counts as a bridge between the trilogy. There was not much action or drama but in my opinion, it was good regardless.

Garett is dealing with all his feelings of inadequacy after being kidnapped and abused for so many years. He doesn’t believe himself a Last Rider. Yet, he feels compelled to help his brothers and to take over Ginny’s security detail to help the rest of the MC.

Ginny, for her part, makes it crystal clear to him that he is her soulmate. She wants him to acknowledge their connection but he dismisses it numerous times. He doesn’t feel lovable and he rather avoids his feelings for her.

I love Ginny. She was a cool character. She was a strong female character and she knew what she wanted. She was determined without becoming a pushover. She was funny and smart. She was caring and she was able to develop good and lasting friendships.

I love the details Mrs. Begley gives us about the other characters. As a reader who is invested in this world, I love to know how my favorite characters are doing.

The relationship between Ginny and her “ brothers”, the Colemans, leaves the door wide open for them to get their own storylines. If you ask me, I would love to read more about them. I also loved the dogs in this book especially Suki.

As always, Greer and Shade added something more to the stories but Silas stole serious page time and I can see him becoming vital in the books to come.

I'm so excited to read the last book in this trilogy. Hopefully, Ginny remains smart and interesting.