Make Up Break Up by Lily Menon 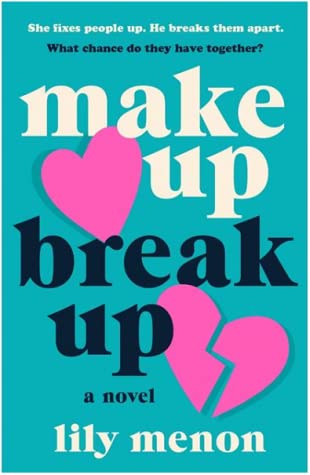 Love, romance, second chances, fairy-tale endings…these are the things Annika Dev believes in. Her app, Make Up, has been called the “Google Translate for failing relationships.”

Which wouldn’t be a problem if they’d gone their separate ways after that summer fling in Las Vegas, never to see each other again. Unfortunately for Annika, Hudson’s moving not just into her office building, but into the office right next to hers. And he’ll be competing at the prestigious EPIC investment pitch contest: A contest Annika needs to win if she wants to keep Make Up afloat. As if it’s not bad enough seeing his irritatingly perfect face on magazine covers when her own business is failing. As if knowing he stole her idea and twisted it into something vile—and monumentally more successful—didn’t already make her stomach churn.

As the two rival app developers clash again and again—and again—Annika finds herself drawn into Hudson Craft’s fast-paced, high velocity, utterly shallow world. Only, from up close, he doesn’t seem all that shallow. Could it be that everything she thought about Hudson is completely wrong? Could the creator of Break Up teach her what true love’s really about?

What happens when your summer hookup steals your ideas, becomes more popular than you, and then moves next to your office?

Yes, this it's exactly what happens to Annika Dev.  When she finds out, she wants to hurt Hudson!

Annika believes in love and in getting a second chance. At least, she believes her new app can do it.  Make Up is the app that could bring couples together. She knows it can be successful. Yet, she is in dire straights. Financially, her company is a mess. She needs an influx of money or she will have to admit bankruptcy. On top of everything else, she can't forget her time with Hudson in Las Vegas.

Hudson is at the top of his game. His app Break Up is a success and money is rolling in. He has accomplished so much in such a short time. The phone won't stop ringing and even famous magazines want to interview him.

Then, a chance to pitch their apps against each other comes up, and neither want to lose the opportunity of gaining the support and money this contest will bring. But can these enemies who have been lovers continue on this path?

I hate to say it but I couldn’t connect with the main characters. I thought Annika was too tough on Hudson all the time.

In addition, the resolution of their conflict was a weak one and I felt Hudson lost too much in the bargain.

I did enjoy the secondary characters and their relationship. It was a plus to the story.

A complimentary copy was provided by St. Martin's Griffin via Netgalley in exchange for an honest review.
Posted by MrsLeif at 7:45 PM