The Switch by Sandra Brown 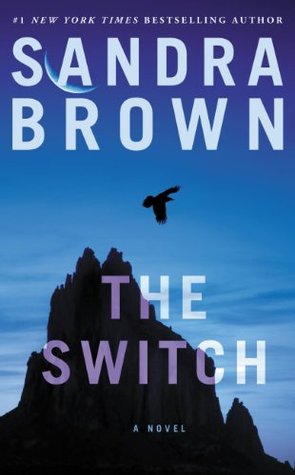 It isn't the first time that identical twins Gillian and Melina Lloyd have switched identities. Yet it's the first time as adults that they've even considered the childhood prank. Melina, the more impetuous twin, proposes that her circumspect sister take her place as a media escort to NASA astronaut and national hero Colonel Christopher "Chief" Hart.

Although it's an enticing offer, Gillian declines for a very personal reason --- she's preoccupied with whether or not the artificial insemination she underwent that day will be successful. Besides, she warns Melina, such a switch could have unexpected consequences.

Media-savvy Chief turns out to be an easy assignment for Melina --- in fact the evening with him is as much pleasure as business. But the following morning police arrive at Melina's door with the worst possible news: her beloved twin has been brutally murdered in her own bed. And on the walls, scrawled in blood, are obscenities directed at Gillian, along with insults toward Native Americans that indisputably link Chief to the crime.

Dissatisfied with the official police investigation, Chief and Melina form a grudging alliance, strike out on their own ... and find themselves uncovering more questions than answers. Mistrusting even the authorities claiming to protect them, on the run with their lives in danger, the two are soon following a crooked and bloody trail that inexplicably leads to Gillian's attempt to conceive a child ... and to the threshold of an inner sanctum, where a megalomaniac hatches horrific schemes and lies in wait for Gillian's replacement, her identical twin --- Melina.

I'm never disappointed when I read a Sandra Brown's book. She has become synonymous with a one-click for me.

The Switch was an addictive story with enough suspense and romance to make me want to stop doing anything else but read,

A pair of twins, Melina and Gillian Lloyd are having lunch together. During it, Gillian informs Melina that she has gone through an artificial insemination that morning. Melina is happy for her sister and she knows Gillian's current boyfriend is fine with it too.

Melina advises she should do something to distract herself. She proposes switching places just like they used to do when they were little. The twins are so identical that no one can tell them apart. Gillian declines. She's not about to behave like a kid again and she heads home instead.

As a media escort, Melina's night assignment is to take Colonel Christopher "Chief" Hart to a gala. Chief is a well-known NASA astronaut whom everyone loves. Melina and "Chief" hit it off from the get-go. They are attracted to each other and by the end of the night, moving to his suite to end the night together sounded like the perfect plan.

The next morning, Melina's nightmare begins. Her twin sister is found stabbed to death. The writing on the wall implies that someone had seen Melina and Chief together and they had assumed it was Gillian.

The twin is devastated by her loss and she wants answers. Chief is stricken too. Together they will look for the truth behind the murder. What they discover is something dark and twisted.

I hated to see one of the twins go. Together they were fun and so very close to each other. But, I guess it was necessary in order for the remaining twin and Chief to go looking for the killer.

I liked Chief. He was there for her to the end. Chief had his own turmoils in regards to his race and what to do with his future after NASA. He was slow to admit his true feelings but I understood his conflicting emotions.

The big baddie was truly an ugly human if you can call him that. Talk about Narcissistic personality. He checked all the boxes with his grandiose ideas. Sadly, I'm sure there's a crazy guy out there just like him.

The Switch had two good twists or maybe just one. I guess I can say, I saw it coming but I still enjoyed the reactions it provoked.

As a side note, I thought The Switch's audio was well done.