The Camel Club by David Baldacci 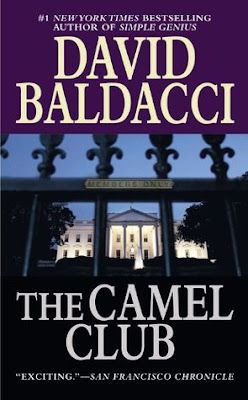 Existing at the fringes of Washington D.C., the Club consists of four eccentric members. Led by a mysterious man know as "Oliver Stone," they study conspiracy theories, current events, and the machinations of government to discover the "truth" behind the country's actions. Their efforts bear little fruit --- until the group witnesses a shocking murder ... and become embroiled in an astounding, far reaching conspiracy. Now the Club must join forces with a Secret Service agent to confront one of the most chilling spectacles ever to take place on American soil --- an event that may trigger the ultimate war between two different worlds. And all that stands in the way of this apocalypse is five unexpected heroes.

“Why can’t people just sit and read books and be nice to each other?”

The Camel Club started very slow for me. I had issues keeping all the characters straight. There were so many! I did enjoy the last half of the book once I was clear on who was who. By the end, I was reaching out for the second book.

The Camel Club begins with the apparent suicide of a government agent but this is far from the truth. Four men are witness to this "suicide". The four men are conspiracy theorists who seek the truth behind the conspiracies. They called themselves the Camel Club.

Oliver Stone, Milton Farb, Caleb Shaw, and Reuben Rhodes have been meeting in secrecy for many years. Unluckily, their last meeting place makes them a witness to this crime. Their lives will be in grave danger and if found, they might not live the week and perish at the hands of some very powerful people.

As the story progresses, we get to discover who Oliver Stone is and his past ties to the USA government. We also meet Agent Alex Ford who's a secret service agent who has had a good honest career. When Alex starts digging into the murder, he's demoted to White House protection detail. Unbeknownst to Alex, the stability of the USA is about to be challenged. Alex and the Camel Club are the only hope to prevent war.

The last part of the book is action-packed. The pages flew fast in a race to know the outcome. I couldn't wait for all the pieces to fall together.

My favorite character was Oliver Stone. A close second was Alex Ford. I was left wanting to learn more about the other three remaining Camel Club members. They all seem to have a very interesting past.