Kiss of the Royal by Lindsey Duga 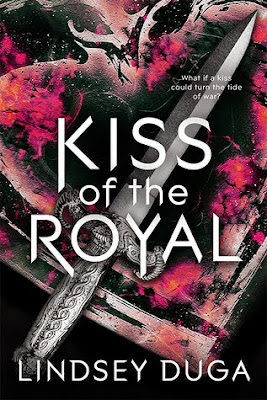 In the war against the Forces of Darkness, the Royals are losing. Princess Ivy is determined to end this centuries-long conflict once and for all, so her new battle partner must succeed where the others failed. Prince Zach’s unparalleled skill with a sword, enhanced by Ivy’s magic Kiss, should make them an unstoppable pair—but try convincing Zach of that.

Prince Zach has spent his life preparing for battle, but he would rather be branded a heretic than use his lips as nothing more than a way to transfer magic. A kiss is a symbol of love, and love is the most powerful weapon they have—but try convincing Ivy of that.

With the fate of their world on the line, the battlefield has become a testing ground, and only one of them can be right. Falling for each other wasn’t part of the plan—but try convincing their hearts of that.

Kiss of the Royal was a truly unique and enjoyable read! The concept of using kisses as a form of magic was something that really intrigued me and made this book such a memorable one! The plot was interesting from the first page, which is really impressive for a debut novel. I do wish there would have a been a little more world building and deeper plot development, but hopefully there will be a book two for that!The characters were all easy to care for and to root for! The author did a wonderful job at creating characters that felt very realistic, even if they were living in a fantasy world. The characters grew a lot throughout the story, and I really enjoyed watching them grow into quite dynamic characters. There were a few times when they did some things or said some things that annoyed me, BUT no one is perfect so those instances didn't make me dislike the characters!The romance in this book was quite cute and it had a lot of moments that put a HUGE smile on my face! Was it predictable? Yes, but I still enjoyed it!Overall, this was a quick and entertaining read! If you are looking for a fun fantasy novel to read in one sitting, I would recommend checking this book out! 3 /5 Fangs*This ebook was given to me in exchange for an honest review. *
Posted by MissDaemon at 8:00 AM