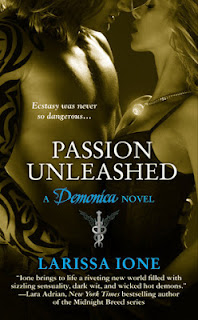 Book three is all about the Seminus Demon brother Wraith.
He was saved by his brothers after being tortured by his mother and vampires. He is part vampire, but he hates vampires.
He also doesn't sleep with humans. But when he is infected with a deadly virus and the only antidote is a charm and a human's virginity, his decision is easily made.
Serena Kelley is an archeologist, she works for the Aegis and is following a relic, she meets Josh, an Adonis kind of perfect. Josh is really Wraith, who starts developing feelings towards Serena.
Serena has had the charm since she was seven. She will die without it. She has childhood sickness that its at bay until she looses her virginity.
This is what Miss Ione does, who will sacrifice their life for the other one to survive. Tough choice. But to makes things more interesting a Fallen Angel has decided that Armageddon should happen in his hands and stealing Serena's charm is the beginning.
I like all the brothers but Wraith reminds me of Zhadist which is my favorite BDB brother. So he had me at tortured soul.
4/5 Fangs