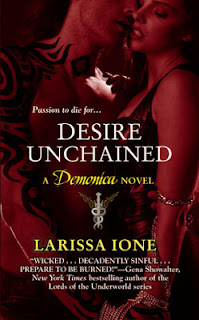 We start book two with Shade (a Seminus Demon) and Runa in a Ghoul's dungeon. They have been trapped together. To Shade's horror someone he cares about has betrayed them and hates him and his brothers.

Runa is the girl whom he started having feelings for a year ago. He broke her heart when she found him in bed with two vampires. When she fled the apartment, she was then attacked by Luc and became a werewolf.

To make matters worse they are spelled to become life mates. This triggers the beginning of the curse or Maluncoeur. The "curse that promised if he fell in love, he'd slowly fade away until he became invisible to everyone. He'd live forever, wracked with stabbing hunger pangs, debilitating thirst, and unbearable sexual desire for all eternity."

There is the issue of Runa not being able to bond with someone who is not a werewolf too.

We catch up with the brothers, the Hospital UGH, and all the secondary characters.

The series gets better. The banter between brothers is fun to read. Reminds me of BDB at times.