Touch of Frost by Jennifer Estep 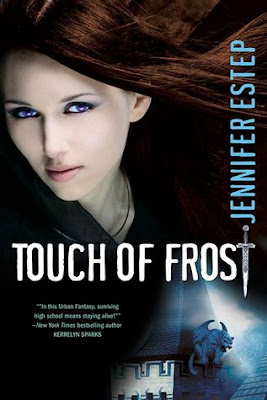 This is the First Book in this YA series. I reviewed the prequel in an earlier post.

The book starts with Gwen Frost who is already at Mythos Academy. She doesn't feel that she fits in with the other kids and their amazing abilities.

She is not a fighter, she doesn't have great strength but when she finds a dead Valkyrie at the library she decides to use her psychometry power to discover who murdered her. She must find out who killed Jasmine, the most popular Valkyrie and who stole the Bowl of Tears a very important magical item that can make evil return.

During her self imposed quest she gets the help of two other students. One is Daphne a Valkyrie who starts as a mean girl and kind of grows on you. Second, Logan (a Spartan boy) who may be the greatest warrior and whom Gwen is attracted to.

Touch of Frost also explains more about Gwen's power and who may have given it to her. It also has all of the high school drama: Mean Girls, Hot popular guys, Geeks, and the Misfits.

Reasons to read this book: