Catch Of The Day by Kristan Higgins 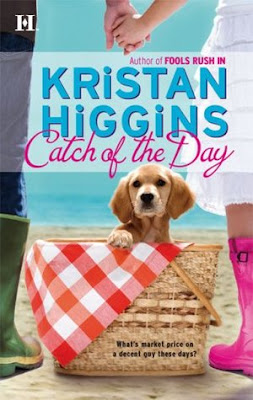 This is the story of Maggie Beaumont. She lives in a little town in Maine. She is the proud owner of Joe's Diner left to her by her grandfather. Her old dog Colonel is her beloved pet, which has helped her during tough times.

She has a twin sister who is happily married with a beautiful child. Maggie is not as lucky. She had a boyfriend in high school who she loved and who broke her heart when he came back to town with a new girlfriend ten years ago. Fast forward a few years later, she meets another guy, who she tells everyone about that he may be The One. To her embarrassment the new guy in town is the new priest. She develops a crush on him which the whole town knows about.

When the priest Tim tries to set her up with different dates, hilarity ensues. On one of the dates, while she is waiting for the blind date to show up she sees her old boyfriend with his beautiful wife. She is saved by the town taciturn hermit Malone.

Malone is a man of few words, he has a mysterious past. He is a lobsterman. Maggie keeps on getting drawn to him.

Can she make him open up? Can she accept him for what he is?

Her beloved pet passed away during this book. It was devastating in a way. I sobbed.