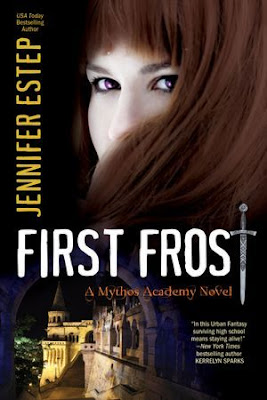 First Frost is the prequel to the series.

In this book, we learned about Gwen Frost, a teenager but also a "Gypsy" who has the gift of psychometry. When she touches things she can tell what emotions the owner had while holding the instrument. It is much stronger when she touches a person. She uses this ability in high school to earn some extra money finding things for classmates. At times psychometry has been a downer, like when she found out her new boyfriend was kissing her but thinking of another girl instead.

Her mom and grandmother both are Gypsies too. The grandmother gets visions and her mother can tell if someone is lying which is helpful in her job since she is a cop.

When Gwen touches the hairbrush of her classmate Paige, she learns that she has been sexually abused by her stepfather. Those strong emotions send her into almost a seizure-like experience and she ends up in the hospital.

After losing a family member she gets enrolled in a new school, Mythos Academy. It takes kids from 16 to 21 years of age. This is not your daily high school. She is to live there and learned more about her gift. She also learns there are other kids who have a different type of magic, Amazons, Spartans, Romans, Vikings and Valkyries.

This prequel sets the story for this new series. I have read Jennifer Estep's Elemental Assassin series, which is one of my favorites and I think this series won't disappoint me either. Funny how the heroine has a name that also starts with G. I am a fan of the writer. Once I finished this book I started Touch of Frost which I devoured in an afternoon.