Spell Bound (Women Of The Otherworld, Book 12) by Kelley Armstrong 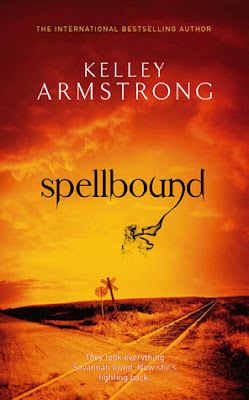 Savannah Levine is in big trouble. She has lost all her powers and she doesn't know why or who took them away. Can it be a Demon, or Deity?

Adam is very much in the picture. She loves him but she doesn't know if he thinks of her beyond friendship.

Savannah finds herself being targeted by several groups. There are witch-hunters trying to kill her. There is Grandaddy in the picture (Eve's father- The Lord Demon Balam, Master of Sight). There is a new group of Supernaturals who want the world to know they exist (Supernatural Liberation Movement) and Immortality questers (which we got a glimpse in earlier books).

Savannah is forced to grow up. She can't be a spoiled kid anymore. She has to learn that she is useful despite not having the great powers she was born with. Clay makes her realize some of this.

I felt that this book is preparing us for the big finale. There are so many questions left for the last installment. A war is coming and all ours friends are in danger. I love that we got cameos from almost every character from prior books. Hope and Karl are back. Hope is forced to see psyco killer Jaz (raise your hand who thinks he will be able to escape on the last book and Karl will get his chance to kill him forever. Yay!!!!)

I missed Eve, the other werewolves, the twins. I can't wait for the next book. In a way it will make me feel really sad. I will miss this family of supernaturals.