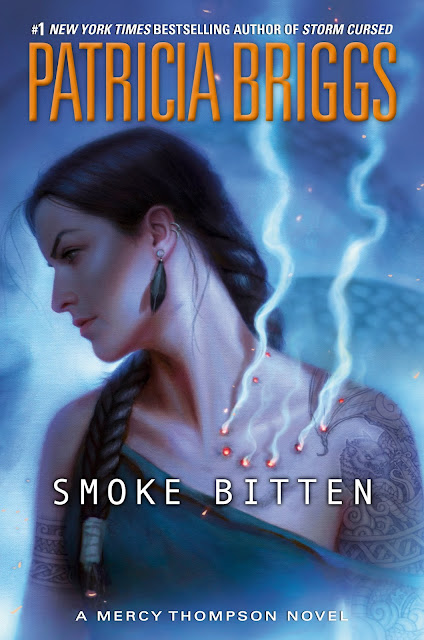 Mercy Thompson, car mechanic and shapeshifter, faces a threat unlike any other in this thrilling entry in the #1 New York Times bestselling series.

I am Mercedes Athena Thompson Hauptman.
My only “superpowers” are that I turn into a thirty-five pound coyote and fix Volkswagens. But I have friends in odd places and a pack of werewolves at my back. It looks like I’m going to need them.

Centuries ago, the fae dwelt in Underhill–until she locked her doors against them. They left behind their great castles and troves of magical artifacts. They abandoned their prisoners and their pets. Without the fae to mind them, those creatures who remained behind roamed freely through Underhill wreaking havoc. Only the deadliest survived.

Now one of those prisoners has escaped. It can look like anyone, any creature it chooses. But if it bites you, it controls you. It lives for chaos and destruction. It can make you do anything–even kill the person you love the most. Now it is here, in the Tri-Cities. In my territory.

Not if I have anything to say about it.

Patricia Briggs never ceases to amaze me. Her world-building is extraordinary. She keeps on bringing new spectacular characters into the fold.

In Smoke Bitten, there are a few things that are going wrong in the Mercyverse.

-A new being is trying to kill Mercy (nothing new there, right?).
-A pack of werewolves is trying to take over Adam's territory.
-Wulfe decides to tell Mercy something she doesn't want to hear.
-Last but not least, Adam and Mercy's mate bond has gone silent.

How can anything go wrong with these events happening simultaneously?  I mean, Mercy is right when she says she's Chaos. She should advertise it with neon lights. Of course, Coyote is part to blame.

From the moment I opened the first page, I knew it was going to be a rollercoaster of events. There is non-stop action and poor Mercy is always in the middle of it. She has to deal with Fae, Underhill, Vampire and Werewolf politics to mention a few.

From the above, the one that annoyed me the most was the Pack issues.

Hasn't she proven her loyalty and love for Adam?

I wanted to give some of these werewolves a big slap on the face. I'm getting tired of their attitude. I almost got mad with Adam too until I understood what was going on with him.

One passage in Smoke Bitten made me wonder what might happen in the next book. I'm not sure it was intentional or I'm just reading too much into it. I guess I could only hope. If it happens, that could be explosive all way around.
“I wonder if Hannah’s granny’s fae blood is the reason that Kelly and Hannah have so many kids,” Adam mused. “Though it seems like the fae blood should work against them, because the fae have more trouble reproducing than werewolves do.” “Maybe it’s Hannah’s granny’s secret ingredient,” I told him. “Take one sip before bedtime as needed for conception.”

I love Mercy, Adam, Ben, Jesse, Stephan and so many more. I'm not sure what I'll do when Patricia Briggs decides to stop writing these characters. It will be a sad, sad day.

A complimentary copy was provided by Roc via Netgalley in exchange for an honest review.

It is so exciting to get back into the world of Mercy! Every time I read one of Patricia's books, I know I am in for an action-packed and addicting book. Thankfully, this book was just that! This book was thrilling, addicting, and captivating. I would expect nothing less from Patricia!

I loved catching up with Mercy and her gang, however, there were some frustrating moments between Adam and Mercy. Adam was acting so...not like himself in this book and his lack of openness and communication with Mercy made me want to rip my hair out. I know their relationship can't be perfect and they will have their up and downs, but this drama felt like it could have been easily solved. Once Adam finally opened up, his actions that previously annoyed me made sense, but I just wish he would have been more open with Mercy from the beginning. Thankfully, Mercy handled the situation with grace and maturity (which I knew she would). Mercy was understanding throughout the entire situation and she didn't jump to any conclusions, which I was so thankful for. WE STAN!

Once they were able to talk about what Adam was going through, they went back to being the couple I have known and loved for so many years! I WILL NEVER STOP SHIPPING THEM!

Of course there was plenty of wonderful world-building and storytelling in this book, and they were my favorite elements of this book. The plot was so interesting and addicting, I honestly couldn't put the book down! I felt like I never truly knew who to trust or what was going to happen next, which was so thrilling. I can't wait to see what Patricia will introduce to us next, because I know her imagination is endless.

Overall, this was a great addition to the Mercy series! I cannot wait to see what Patricia comes out with next!

A complimentary copy was provided by Roc via Netgalley in exchange for an honest review.