Queen of the Darkness by Anne Bishop 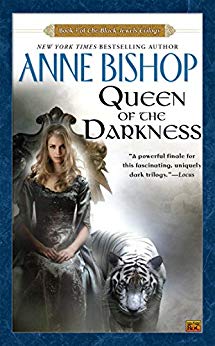 Jaenelle Angelline now reigns as Queen-protector of the Shadow Realm. No longer will the corrupt Blood slaughter her people and defile her lands. But where one chapter ends, a final, unseen battle remains to be written, and Jaenelle must unleash the terrible power that is Witch to destroy her enemies once and for all.

Even so, she cannot stand alone. Somewhere, long lost in madness, is Daemon, her promised Consort. Only his unyielding love can complete her Court and secure her reign. Yet, even together, their strength may not be enough to hold back the most malevolent of forces.

My understanding is that the Queen of the Darkness was going to be the end of the trilogy.  As I was reading it, I could see why it had that feeling. The main characters are well developed and ready for battle. A battle that we as the readers knew it was coming. There was no way Dorothea and Hekatah could cause so much harm and not pay for it. After all, everything has a price or so we're told.

Jaenelle Angelline is the Queen. She is a Witch. The most powerful in the world. She also has her own court and she has the Kindred as her friends.

Daemon is the Queen's Consort. He's powerful, dangerous and devoted to his Queen. So is his brother Lucivar and their father, Saetan.

When so many are threatened, Jaenelle would do whatever is necessary to keep the ones she loves safe with the help of Daemon and the Kindred.

Queen of the Darkness was truly enjoyable. The characters have grown over time. Their personalities are well defined. One of my favorites now is Surreal. She has grown on me and she has become vital to the series. Of course, I like the main characters and the Kindred too.

I'm glad that this was not the end of the series and I can enjoy reading more about this world.