Heir to the Shadows by Anne Bishop 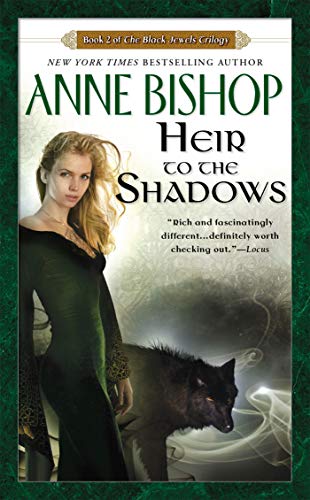 In the second novel set in the “darkly fascinating world” (SF Site) of Anne Bishop’s Black Jewels Trilogy, ambitions unfurl as the realm’s dreams of a liberator have finally been made flesh...

The Blood have waited centuries for the coming of Witch, the living embodiment of magic. But Jaenelle, the young girl singled out by prophecy, is haunted by the cruel battles fought over her—for not all the Blood await her as their Savior. Some dismiss her as a myth. Some refuse to believe. And still others look forward to using her, making her a pawn to their shadowy devices.

Only time and the devotion of her loyal guardians have healed Jaenelle’s physical wounds. But her mind is fragile, barely able to protect her from the horrifying memories of her childhood. Nothing, however, can deflect her from her destiny—and the day of reckoning looms near. When her memories return. When her magic matures. When she is forced to accept her fate.

On that day, the dark Realms will know what it means to be ruled by Witch.

After the events in Daughter of the Blood, Jaenelle has been in a coma for two years. She awakens in the safety of her adopted father's keep and her physical and mental healing begin as well. Slowly, she is coming back to life and before you know it, she is a teenager. Jaenelle is coming into her powers and is learning how to use them. She is also forging alliances with her friends, the Kindred and starting her own coven without no one realizing it. Yet, she's marked by that terrible night at the altar. Her mind was fragmented by the attack and some memories are too painful to remember them.

Another one who's scarred after that night at the altar was Daemon. His mind became fragile after trying to help Jaenelle and failing. A confrontation with Lucivar only pushes him farther to the edge of madness.

Lucifer has lost faith in his freedom and is ready to give up until someone helps him take a different path.

Of course, the two evil women, Dorothea and Hekatah continue to fabricate schemes to damage all of them. Jaenelle, Daemon, and Lucivar would suffer through many of their plots. It baffles me that none of the three and or Saetan have killed them. Of course, if they did, there wouldn't be a story.

Heir to Shadows was less bloody and traumatizing than its predecessor. There was plenty of character development and some very humorous parts. The huge drawback was having Jaenelle and Daemon separated for most of the book, it just wasn't much fun.