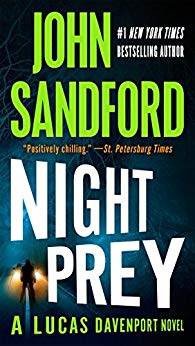 Porsche-driving Lucas Davenport, who has just returned to duty after recovering from a serious gunshot wound, is charged with saving the political life of Rose Marie Roux, the ambitious police chief who has her eye on a Senate seat. He's given the assignment of tracking to ground the sex-crazed perpetrator of a series of murders of young women. Davenport's unwelcome colleague in this case is feminist Meagan Connell, an abrasive State Bureau of Criminal Apprehension investigator who's obsessed with catching the killer before she dies of cancer.

Also bedeviled by the ill-timed assignment of a new partner, a yuppie who was formerly assigned to the grade schools as "Officer Friendly" and who happens to be the husband of the mayor's niece, Davenport is additionally saddled with the mystifying death of an elderly woman who died rather conveniently, freeing some local hoods to profit from a real-estate scam.

The killer is dropping bodies all over the metropolitan area ... and makes the mistake of becoming a little too obsessed with a potential victim and thus leaves a trail that Davenport and his fellow officers finally discover.

Lucas Davenport is now officially back as a cop working under new leadership. The new police chief

Rose Marie Roux needs help with a possible serial killer. Megan Connell is a Minnesota State investigator who believes multiple women have been murdered, at least one every year.

The unsub's name is Koop. He picks his female victims carefully. Usually, women who are quiet and unassuming. He's also a cat burglar. When he gets into the apartment of Sara Jensen, he becomes obsessed with her. He even gets her perfume to be able to recall her smell.

It's up to Lucas to figure out who Koop is and how to get the guy.

I liked Night Prey. Koop was a completely crazy animal. Sara Jensen triggers in him such a violent response that he starts making mistakes and other people's lives are taken by him due to his frustration.

I like that Lucas is living with his girlfriend Weather Karkinnen. She brings the best out of him. She's smart and funny. Of course, Lucas still has a wandering eye but at least he refrains from much.

Lucas dealing with Meagan Connell was also different. Meagan is dying from cancer and she wants Koop taken care of before she dies. I felt sad for her.

As always in this series, we get funny moments, sad ones and a lot of action too.