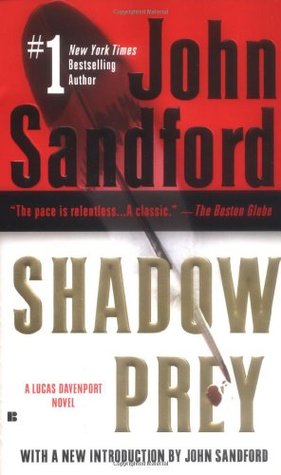 A slumlord and a welfare supervisor butchered in Minneapolis . . . a rising political star executed in Manhattan . . . an influential judge taken in Oklahoma City . . . All the homicides have the same grisly method — the victim's throat is slashed with an Indian ceremonial knife – and in every case the twisted trail leads back through the Minnesota Native American community to an embodiment of primal evil known as Shadow Love. Once unleashed, Shadow Love's need to kill cannot be checked, even by those who think they control him. Soon he will be stalking Lucas Davenport — and the woman he loves...

Never get involved with a cop: Lieutenant Lucas Davenport has been warning women for years, but now he finds himself on dangerous ground with a policewoman named Lily Rothenburg, on assignment from New York to help investigate the murders. Both have previous commitments, but neither can stop, and as their affair grows more intense, so too does the mayhem surrounding them, until the combined passion and violence threaten to spin out of control and engulf them both. Together, Lucas and Lily must stalk the drugged-out, desperate world of the city's meanest streets to flush out Shadow Love — not knowing they are now the objects of his deadliest desires....

Well, Shadow Prey was underwhelming. There wasn't as much action as with Rules of Prey. The last third had a faster pace and it kept my attention.

In Shadow Prey, we have Lucas Davenport investigating a series of murders done by Native Americans. The attacks seem to be coordinated by a pair of brothers, Sam and Aaron Crow and committed by different individuals including Shadow Love. Once the media and the FBI get involved, everything becomes much more dangerous.

Lucas' personal life seems to be stable. He's with Jennifer Carey and they have a daughter together. Yet, we know this won't last. Lucas is a womanizer. He "loves" women and can't live without them. He's unable to be faithful.

When one of the slayings involves the city of NYC, a NY cop is sent to assist with the investigation. This is how Lily Rothenberg becomes Lucas' sidekick.

The first time Lucas sees Lily, he knows she's his next conquest.

I had some issues with the plot. I wish John Sanford would've explained more about why the Crows had taken the time to plan and coordinate the attacks. I felt like it was glossed over which is a shame because the slayings were done with purpose and the readers should be clear on why.

My recommendation for any reader is to wear their 90's hat when they read this series. It will avoid a lot of irritation.

I'm committed to the Lucas Davenport books, so Eyes of Prey is next for me.